From Warhammer - The Old World - Lexicanum
(Redirected from Norscans)
Jump to: navigation, search 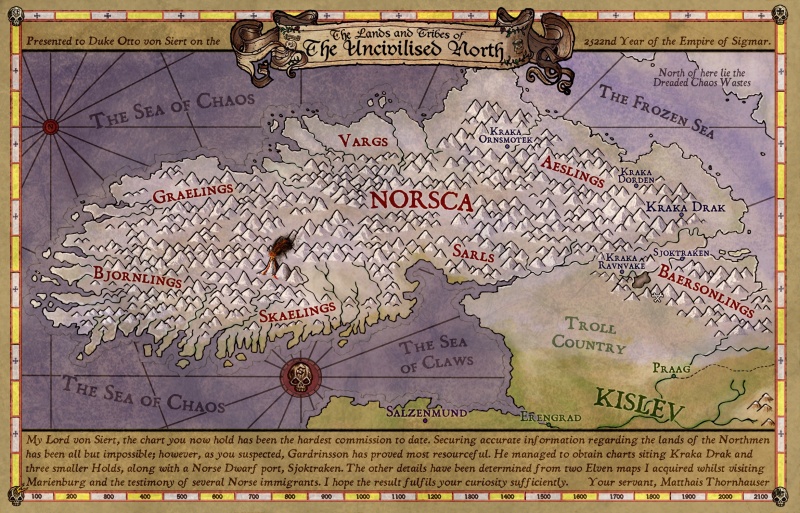 Norsca is a peninsula located to the north-west of Kislev, a harsh mountainous land surrounded by the sea. A land of cold and unforgiving winters and its dense forests are haunted by many dangerous beasts, notably Trolls and Giants.

This savage land breeds hard men and the Norse are fierce and hardy barbarians. They have a fair skin and most have red or blond hair. Clad in fur and warlike, they are considered Chaos Marauders. However they are relatively far from the Chaos Wastes and the least favoured by the Chaos Gods.

Being also great explorers, others take long journeys far to the west, towards Lustria. There they loot the ruins and temple cites of the Lizardmen. Here they have established the colony of Skeggi.

Some Norse emigrate into the Old World, usually working as mercenaries and bodyguards. Most, if not all, find their first steps in the Old World to be in the city port of Marienburg.

While the most common view of the Norse is as pirating reavers and pillaging marauders, looting and destroying everything they reach, not all Norsemen are bent on rapine and slaughter. Many deal with their neighbours honestly and fairly. Part of this "civilised" behaviour stems from Marienburg's efforts to establish mercantile inroads to the frigid lands of Norsca to increase their trading influence. Marienburgers hope to cultivate a buffer state against the Kurgan tribes and the more savage Norsemen.[1a]

As a result of this new era of prosperity the Norse have slowly returned to the ports of the Old World, signing on as mercenaries or even as merchants, selling whale oil, ivory and lumber among other goods.

The Norse are divided in a variety of tribes, these larger tribes are further divided into the Southern and Northern.

The Northern tribes include:

The tribes of north are closest of the Norse to the dread Chaos Wastes and the roving Kurgan tribes of the steppe, hence they are the most warlike of the northmen. Mutation is common among these tribes and they are often at the forefront of incursions, driving the way for the Kurgan tribes, willingly or not. They are a brutal and bloodthirsty lot. Merciless, they kill for the love of killing.[1b]

The Southern tribes include:

The southern tribes are somewhat milder than their northern counterparts. While they raid and plunder like the rest of their kin, it is from these tribes that the new efforts for peaceful communications originate. They raid when necessary for survival, but are more interested in acts of heroism and adventure over the carnal slaughter embraced by their savage kin. More civilised as they may be, they still fight with rival tribes. In fact, the Bjornlings are fierce rivals of the Graelings, and the Sarls regularly fight the Aeslings and the Baersonlings.[1b]

That said, during the Chaos Incursions, these southern Norse banded together to wage war against the Empire as it was demanded by their Gods. Refusing the call of battle is grounds for annihilation.

The lesser tribes of the Norse are gatherings of people that share common ties, be it familial, martial or religious.

Long ago many Norscans set sail to the mysterious jungles of Lustria, seeking to pillage and plunder their temples, some stayed and founded the great settlement of Skeggi and thus the great Skeggi tribe was formed.

The Norse have many names for these gods, but also worship other beings (many seem to be either Daemon or Daemon Princes) and spirits of ancestors and heroes. There also seems to be other Gods, which might be Gods that are not related to Chaos. Even the gods of the Old World are being venerated by the Norsemen, further broadening their already impressive pantheon and causing no small theological headache to the civilised people of the south.

Main themes for Norse pantheon include: War, Desire, Decay, and Hope. Their pantheon rarely features just a single God per theme, rather they may have several.

An important distinction is to be made of the Vitki and the terrifying Chaos Sorcerers: Admittedly most Norseman spellcasters are Sorcerers, Witches and Warlocks. All of these mystics draw their power from the Winds of Chaos, but in a more condensed form because of the relative closeness of the polar rift, they channel Dhar to suit their needs.

In addition to this there is an older tradition, that places emphasis on divination, healing and prophecy. Whilst being often included in the pantheon of corrupt Daemonologies, the Vitki are not blatant servants of the Ruinous Powers, as the Chaos Sorcerers are wont to, instead working their magic to aid their people.

The Norse Dwarfs are related to the Dwarfs of the southern strongholds. The separation over the years has led to the development of cultural differences. The Norse Dwarf have taken on some more wild characteristics compared to the mainstream of Dwarf society. In many ways they resemble the Norsemen in expression, arts, and temperament.[2a]