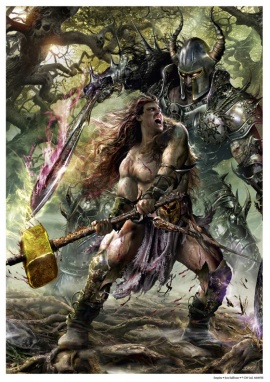 Morkar in combat with Sigmar Heldenhammer

Morkar the Uniter was the first Everchosen of Chaos. A tribal chieftain of Norsca, Morkar received the blessings of the Gods of Chaos and launched an invasion of the early Empire of Man but was ultimately defeated by Sigmar.

Born of the Taalos tribe of the Norsii, Morkar had risen to ascendancy in the eyes of the Chaos Gods as the first of their ultimate champions. He was charged with establishing the mortal realm as the Kingdom of Chaos, and thirsted for vengeance against Sigmar for destruction of his clansmen during his reprisal raids against the North. Having gathered a great army from amongst the Norse, and other races sworn to Chaos, the Uniter led his host of warriors south.

Little is known of the invasion, but it is clear that it was one of the most earth-shattering in all the Empire's ancient history. Few of the wars of its modern age can possibly compare to its scale of devastation and destruction. With Morkar's victories, the power of Chaos surged from the North, bathing the world in the breath of the Dark Gods. With such power, the Daemons of the Realm of Chaos materialized in the mortal world, and marched alongside the ranks of the Northmen. With each city that fell, Morkar avenged the long dead of his fallen tribe, thirsting only to cross blades with he who had led the charge.

Eventually, Sigmar rallied the Imperial armies and faced Morkar and his Norsii. Once more did the men of the South do battle against the indomitable warriors of the North. In the battle, Sigmar faced the terrible Skulltaker of Khorne, and dealt a terrible blow upon the thing's vile head that saw it destroyed and banished by back to Khorne's Halls. Thus was U'zuhl defeated, for the first and last time, forever carrying the legacy of his humiliation at Sigmar's hand upon his scarred horns. But little was this compared to the titanic duel between Sigmar and Morkar, and the mortal world has never before nor since seen the equal of that cataclysmic clash of titans.

For a day and a night did Sigmar duel the champion of the Northern gods, in a battle likened to that between gods themselves. The fury of their combat did rend apart the sky and split the ground asunder with peals of thunder, strikes of lightning and raging torrents of fire. The two avatars of the gods matched their arms in such glorious contest, at least had they found their equals. Regardless, the Everchosen, though he had come closer than all others to ending Sigmar's life, was nonetheless defeated and struck down by the Emperor's mighty hammer Ghal Maraz. The destruction caused by this first of the Great Chaos Incursions was thus ended with Morkar's downfall, and thus his staggeringly mighty army was driven back to the north.

Archaon later found Morkar's armour in an undiscovered realm populated by savage half-humans. Archaon and the Swords of Chaos gave battle to these benighted creatures for six days and six nights until their city lay in ruins. In the depths of their necropolis, Archaon uncovered the tomb of Morkar. As Archaon reached out to claim the Everchosen’s armour, it came to life and attacked him, raining a relentless flurry of blows against the Chaos Lord. Only when Archaon spat a curse in the language of the Unberogen did the armour’s implacable assault cease for a split second, allowing Archaon to smash it asunder with a devastating counter-attack. The spirit of Morkar was banished, and Archaon took the armour for his own.