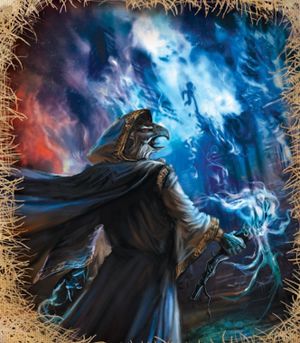 A Chaos Sorcerer is a wizard who follows one or all of the Chaos gods. [2a]

Those followers of Chaos who seek mastery over the magical arts are known as Chaos Sorcerers, and they are madmen and malcontents all. Chaos Sorcerers wield the wild energies of entropy itself, reshaping reality to better serve their whims and those of their dark masters. A word and a gesture from a Chaos Sorcerer can strip a man's flesh from his bones, force a lover to murder his beloved, or cause a regiment of soldiers to burst into flame. They are amongst the most awful and depraved of all servants of Chaos, for they long ago sold their souls in exchange for the heady elixir of pure power.

Where many of the world's wizards, such as those taught by the Colleges of Magic in Altdorf, glean their arcane skill from long years of painstaking research, a Chaos Sorcerer's understanding of the Winds of Magic is instant and innate. However, without the patience and wisdom that such study brings, a Chaos Sorcerer lacks due wariness and respect for the ultimate dangers of magic, and so begins an inexorable descent into deformity and madness. Many are the paths that lead to this ultimate fate, but most often, the Chaos Sorcerer seeks to expand his magical powers or harness more of the occult by simply bartering away another fraction of his soul, losing a little more of his humanity in the process. Before long, the aspirant feels his whole body and mind twist and alter, and as the gnawed remnants of his soul are finally devoured, he is plunged into the whirlpools of insanity, leaving behind nothing of the man who was.

Those followers of Chaos who offer their souls to the Dark Gods in return for the mastery of forbidden lore achieve great power, at a cost. The raw Winds of Magic are often too much for their sanity to bear. Only the strong-willed can wield such fearsome magic. Sorcerers devoted to Nurgle can inflict suffering and affliction at a whim. Clad in decaying Chaos armour and rotten robes, their body host to a hundred ailments, their incantations can cause flesh to blister and skin to slough from muscle. They can enchant worms to infest a victim’s organs, consuming him slowly from within, and can rain down boiling bile from the sky. They also have the power to regenerate injured flesh, scabbing over wounds in mockery of Shallya’s blessings.

Chaos Sorcerers are powerful and dangerous foes, using more of the Winds of Magic than their counterparts at the Colleges of Magic despite the risk of mutation, corruption, or even worse fates. Sorcerers of Slaanesh are powerful spellcasters capable of distorting and distracting the mind to cause seizures, frenzies, and delusions. Some sorcerers of Slaanesh are former students and acolytes of the Imperial colleges who have fallen and turned to Chaos. There are many reasons why a man may sell his soul to the daemonic power of Slaanesh. Perhaps the wizard felt impotent in comparison to his peers or simply desired even greater power. Others, delighting in their creations and cantrips, have fallen into a pattern of excess, devolving over time into a devotee of Slaanesh until their greed transforms them into a mere puppet, a tool of the Ruinous Powers.

These depraved sorcerers take great joy in using their powers for destruction or pleasure, weaving through the Winds of Magic with their minds and basking in pure Chaos energies.

Others still are men from the harsh north that have been raised to Chaos. Either through prayer, mutation, or sheer luck, these sorcerers have become attuned to the Winds of Magic and are bestowed with the same great powers as their fallen brethren.

Masters of the darkest magic, Chaos Sorcerers are rightly feared. To face one is battle is to know that your very soul is in jeopardy, but it is those that have dedicated themselves to Tzeentch that wield the greatest power. Champions as they are of the Master of Magic, the Sorcerers of Tzeentch have the deepest knowledge of the dark arts, and possess the necessary skills to perform the greatest acts of daemonic summoning.[2a]

Often found in an advisory position to powerful champions of the Gods seeking their gift of foresight, the scheming and manipulative nature of Sorcerers of Tzeentch will usually leave little doubt who wields the true power behind the scenes, though their supposed masters usually remain oblivious to that fact.

A Sorcerer of Tzeentch will traditionally be garbed in robes of deep blue, and will almost certainly bear signs of mutation, such as an avian head, tentacles, or hands and feet that end in razor-sharp talons. Some Sorcerers wear lavishly detailed belts and shoulder pads of jewel-studded gold, whilst others wear baroque suits of skull-emblazoned Chaos Armour and ornate helmets.

All will carry a magic staff that blazes with evil power, engraved with runes of hate and disharmony that are an anathema to the witch-sight of their rivals in magic. Particularly favoured Sorcerers may receive the gift of a daemonic Disc of Tzeentch to carry them into battle, offering them unrivalled speed and manoeuvrability - a superb platform from which to unleash their devastating spells.

A Magus of Tzeentch is a powerful form of Chaos Sorcerer who excels in the summoning of the Raven God's foul Daemons.

A magic user of terrifying renown, able to wield fell energies and bend them to his grim will, a Chaos Sorcerer Lord is a fearsome foe to encounter. Able to bestow his followers with daemonic essence, boosting their skill, strength and endurance to unholy levels, his magical abilities and oracular visions make him indispensable.