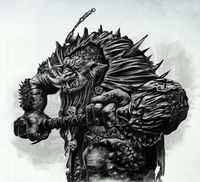 Throgg is the King of Trolls that united the creatures of the hinterlands into a vast army to destroy the race of Man.

He is a being possessed by a grim and malevolent cunning. The weapons embedded into his skin both shows the toughness of his skin, thick, scaly an spiked, and has trophies. He wield an immense chain-bound rock-hammer and a ragged cloak sporting various trophies and braids into battle. He has huge, fibrous, muscular arms and a thick-toothed maw. Skulls are woven into his hair.[1]

Throgg hopes to create more intelligent trolls and to that end has kidnapped a number of wizards including a Imperial Wizard of the Empire, two vitki of the Sarl and even a Skaven Master Moulder. [3a]

He enjoys fishing, sitting alone with his thoughts on a cliff, casting out a line to snare and drag in a fishing boat or merely hold it in place so he can wade out and batter his catch. [3a]

The Beasts of Telldros attacked his lair in 2435 IC, rampaging through to Winter Pyre until Throgg used a Bray Shaman as living bait to aim the monsters at a rivals lands. [2a]