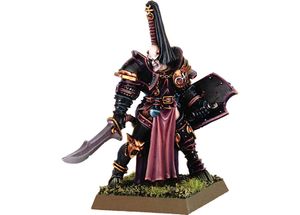 Styrkaar of the Sortsvinaer was a young champion of Slaanesh, leader of his tribe of the Norse, killer of his own father and one of Archaon's Lieutenants.[1]

Born in Norsca as the son of Svengor, the chieftain of the Norse tribe of the Sortsvinaers, his mind interfered with that of a daemonic entity, which called himself Sle'zuzu since his birth. Following the whisperings of the Daemon the young boy became a charming youth and a successful leader of his first own raids on the coasts of the Old World. His father was eaten away by jealousy and insulted his son, who murdered him during a great feast after a victorious raid. After that Styrkaar's mind merged with that of Sle'zuzu, and the young champion became new leader of the tribe of the Sortsvinaers. He erected an altar in the name of Shornaal and was granted with an alabaster white skin, an elaborate suit of Chaos Armour and a snake-like Steed of Slaanesh. He led his tribe through the Chaos Wastes and against the armies of the champions of the other three Gods of Chaos and even against rival champions of Slaanesh. After killing Vandred, one particular Champion of Slaanesh, who was said to be Archaon's chosen, he was confronted by Archaon himself. But the two warlords didn't fight. Instead Styrkaar asked for and became one of Archaon's lieutenants, and led one part of his great army during the Storm of Chaos.[2]

He and his army sacked the towns of Kurst and Zundap, but the excessive victory celebrations delayed the march of the Slaanesh horde. Then he laid siege on Hergig, the capital of Hochland and sacked it, with the help of Skaven allies. Exhausted from the long siege and the following celebrations, that lasted for weeks, he and his men did not play a big part in the upcoming siege of Middenheim.

Styrkaar of the Sortvinaer is shown on card 8 of the "Legions of Chaos" card set for the WarCry CCG.