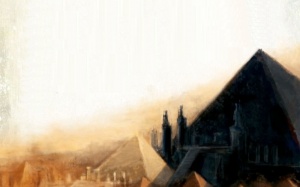 The Pyramid in the Khemri necropolis 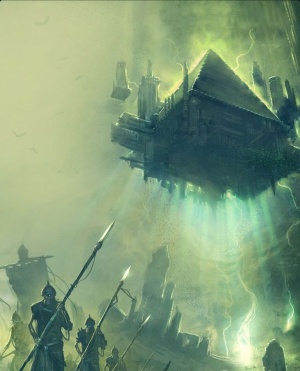 The Black Pyramid leaving Khemri to travel to Sylvania.

The Black Pyramid of Nagash was part of the Necropolis of Khemri within Nehekhara, the land of the Tomb Kings of Khemri.[1]

The largest pyramid in Khemri, dominating even that of Nagash's father, Khetep.

It was made of stone the colour of ebony, which Nagash demanded from all the cities of Nehekhara and when completed it appeared darker than the night. Arcs of lightning would appear and crawl across its surface as it attracted and collected dark magic, feeding initially on the many thousands that had died to build it. [2b]

It was built under the reign of the evil sorcerer Nagash, by uncounted slaves brought to Khemri from all over Nehekhara. Construction began in -1950 IC [2a] under the direction of the architect Sumesh. It took two hundred years to complete, draining dangerously low the weath and power of Khemri and forcing increasing levels of civil service by its citizens. Tens of thousands laboured every year to build it, many of whom perished and had to be replacd with new slaves and prisoners. [2b]

With its completion Nagash cast a great curse across Nehekhara which killed large numbers of priests across the land. This act of heresy was enough to start the Priest Kings' rebellion against the one they called the Usurper.

After being defeated by the army of the Seven Kings, Nagash abandoned his pyramid and it remained undisturbed for over a millennium, shunned by all. Even when, centuries later, Nagash's army entered Khemri to drag King Alcadizaar to the Great Necromancer's fortress of Nagashizzar, the pyramid remained empty. However, 1,111 years after being killed by Alcadizzar, Nagash regenerated his body inside the pyramid, something he would do again, 1,666 years after his death at the hands of Sigmar. He could never claim the pyramid or the power it contained, however, as he was always driven out of Khemri and Nehekhara by the forces of Settra.

Nagash finally gained access to his pyramid during the End Times. After yet another resurrection he led several huge armies into Nehekhara. After consuming the Nehekaran god of the underworld Usirian and destroying the forces of Settra, Nagash had all of Khemri razed to the ground save his pyramid. This he summoned from the ground and had it fly through the air to Sylvania.

In Sylvania it soaked up the huge quantities of death magic that Nagash had bound to the land. With this huge repository of power Nagash might have challenged the Chaos Gods themselves. Not prepared to accept this, the pyramid was destroyed by the new allies of Chaos, the Skaven, using a huge invasion of Nurgle daemons as a distraction, a team led by Ikit Claw sneaked into the pyramid and planted a deadly explosive device. The pyramid was blown apart and the magic it stored was dispersed.

Not just a monument to Nagash's pride, the pyramid was painstakingly designed to store death magic and to amplify Nagash's powers. [2b]