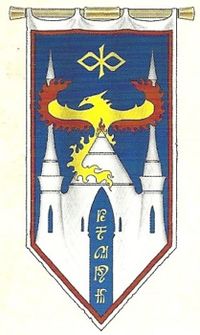 The Phoenix Gate is one of the five great fortresses that guard the Inner Kingdoms of Ulthuan. [1a]

It has a standing garrison of some of the finest warriors of the realm, with service at the fortress being considered a great honour, although few survive thanks to the many dangers. [1a]

Its towers reach high into the clouds of the Annulii mountains and the majority of those that guard are from Eataine, although their archers are normally from Avelorn and Caledor who use arrows blessed by the nnointed of Asuryan. The eagle Claw Bot Throwers on the walls are the most accurate on their type. [1a]

Since its creation by Caledor I, it has been destroyed and rebuilt on a number of occasions, leading to the following oft recited by the garrison Should the enemy topple our walls then we shall simply build the higher and grander than before. [1a]

Tyrion led the defence of the Gate against the forces of Malekith, at one point charging into the invaders with a formation of Silver Helms, killing many of the Black Guard inclduing their captain, Kouran. [2a]