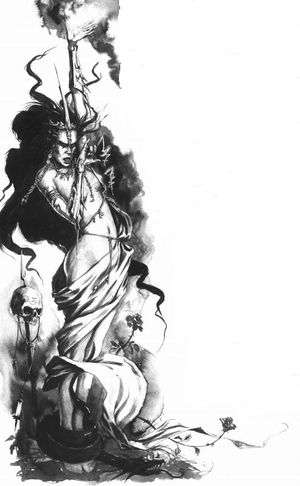 a Sorceres of the Dark Convent

The Dark Convent is an ancient organisation of Dark Elf Sorceresses in Naggaroth. [1]

It was founded in -2600 IC [1d] by Morathi and Anethra Helbane [1a] in the new city of Ghrond, the North Tower where aspirants would undergo many and terrible tests and trials. Then Morathi would use them to study and probe the Realm of Chaos so she could locate the strands of fate that would grant her final victory over the High Elves of Ulthuan. [1b]

A great Chaos horde invaded in and besieged Ghrond which held out for three weeks before the Witch King could relieve it - he imprisoned the surviving sorceresses who had not foreseen the invasion. [1c]

The Convent discovered that the Phoenix King Caledor II had left Ulthuan to fight the Dwarfs provoking Malekith to gather a might army and fleet to invade. [1c]

In 1122 IC A High Elf fleet seeking to avenge the death of Aethis is detected by the Convent and is annihliated as it tries to land troops in Naggaroth. [1d]

Seven Sorceresses of the Convent accompanied Lokhir Fellheart in 2422 to the site of the sunken city of Chupayotl, providing his warriors with the ability to breath underwater. The warriors fight off aquatic Lizardmen, vast manta rays and squids but return laden down with magical artefacts that fetch a high price in Ghrond. [1e]