For other uses of the name, see Caledor (disambiguation). 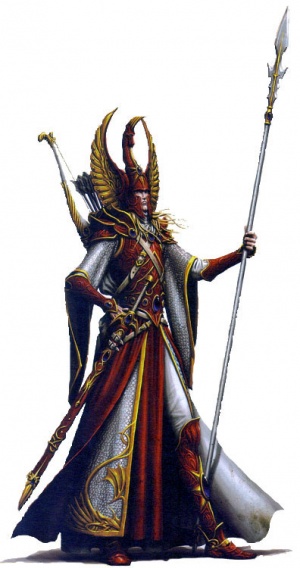 Caledor II or Caledor the Warrior was the 3rd Phoenix King of the High Elves. [1a]

An arrogant king, Caledor II threw away an important ally, and so began the War of Vengeance (known to that lost ally as the War of the Beard).

Despite his contempt for the Dwarfs, he was fluent in Khazalid. [2a]

He had several siblings:

On the death of his father, the Council of Princes choose Caledor to become the third Phoenix King however unlike Caledor I his son was bombstic, overweening and vain but he was also a powerful and deadly warrior. [1a]

The early years of his reign saw trade routes restablished with the Dwarfs as his fleets drove the Dark Elves from the northern seas. [1a]

However Elf raiders began attacking Dwarf caravans, killing all the travellers and stealing their goods for which the King Gotrek Starbreaker demanded recompense. Caledor dismissed these demands and suggested that might grant a suitable phrased plea which outraged the Dwarfs who now demanded twice the payment. When Caledor had the ambassadors beards shaved off, war was inevitable between the two powerful empires. [1a]

The city of Tor Alessi was besieged and Caledor dispatched a vast army, navy and most importantly Dragons but although they drove the Dwarves back, the war continued. [1a]

He led twenty thousand warriors to the site of the old Dwarf mine of Angaz Baragdum where he was confronted by a large force led by Snorri Halfhand. In front of the two armies, the two fought a short duel where Caledor quickly slaughtered the prince with ease. Reinforcements led by Morgrim Bargrum then arrived and so amused by his easy victory and now heavily outnumbered, the Phoenix King withdrew to his waiting ships. [2a]

At the fourteenth seige of Tor Alessi, Caledor was cut down by King Gotrek himself who claimed the Phoenx crown as payment for the grudges incurred and returned home. [1a]