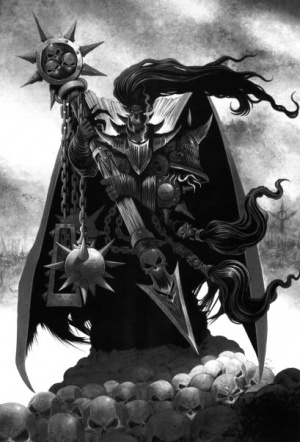 The Scion of Nurgle.

Valnir the Reaper, known also as the Scion of Nurgle and the Reaper of Souls is a great Chaos Champion of Nurgle, the Chaos God of Decay, and Pestilence. According to the sagas of the Crow tribe of Norsca, Valnir was once a great chieftain and warrior. His strength of sinew and skill at arms such that he was the equal of the mightiest warriors of the numerous Khornate Norse tribes. Yet despite his power and glory, despite the multitudes of victories he garnered for his tribe, the chieftain is said to have felt no pleasure. He took no pride in his strength or appearance, nor did he partake of the luxuries his small empire of conquered lands could bestow. Why this may have been, none of the legends recall, but all agree that Valnir was ever a man of grim visage and heavy heart. Indeed, it was often said amongst the Norsemen that were Valnir's misery to flow as river, it would have enveloped all the North in its bitter waters.

Yet no defeatist apathetic was Valnir, for the chieftain had hated all the world with a passion, though none remember why, and was determined to impose his misery upon all the lands of men. In time, the chieftain left his tribe, swearing that he would not return until he had found a way to make to world suffer as he did. It was this purpose that led Valnir to sail across the Frozen Sea, travel through the lands of the Kurgans, and finally range far to the north to the Chaos Wastes, where he pledged his soul to Nurgle and became his mighty champion.

Valnur was eventually slain again during the End Times . After an epic duel with Wulfrik the Wanderer which lasted hours and left hundreds of corpses from lesser champions and chosen of chaos.

In the sagas, it is said that Valnir's desperation grew as it became ever more apparent to him that nothing could sate the bitterness within his heart. The sheer hopelessness of his state became apparent to him when he and his reavers prepared to descend upon an enemy village. With tears of frustration glistening in his otherwise dead eyes, the chieftain declared to his bondsmen that he no longer cared for the thrill of battle, nor the expansion of his lands, nor the joys of taking the daughters and wives of his enemies as slaves. All he wished now from war was to show the world how it meant to suffer as he spent every waking moment suffering, and no torture or action he could conceive of came close to making this a reality. Valnir's fellow Norsemen were astounded by this grim declaration, and were then made more so when Valnir announced that he would fight no more battles until he had found a way to hold a mirror up to the world and show it the futility of its endeavours and the truth of despair. And with no further words, Valnir left the hall of the Crow tribe.

North he walked, the flickering lights of the Chaos Wastes his compass. His misery knew no bounds, yet his resentment of all the world drove him ever onwards. North he continued, until he entered the lands of the vicious Varg clans, and then he sailed east from there, over the Frozen Sea until he reached the lands of the Kurgan nomads. He then slaughtered his way through their tribes and holdings, for he was an outlander to them. Past their rolling plains he had turned red with blood, the warrior ranged north until he had crossed the steppes and entered the madness of the True North. Once he had entered that hell-stained realm, he came upon a wide plain stretching out as far as the eye could see, and it echoed with the baying of hounds. Any lesser man would have been unmanned by the sound, but Valnir cared not. Death held no fear for a man who hated life. Huge were the beasts who shadowed him, fully four feet at their shoulders. Valnir smashed them to the ground and continued on his way, never once breaking his stride. Again and again the wolfish creatures came upon him, and again and again he cut them from his path. Eventually he entered the foothills beyond the the plains of hounds, and the attacks began to grow less frequent and then finally stopped. Yet the gaunt warrior of Norsca had not emerged from the ordeal unscathed. His entire body was crossed with lacerations and scarring, and it was clear from their growing heat that they contained infection. Still, Valnir did not care, and pressed further into the madness of the True North. Monsters of great horror lay waiting from beneath the black ice, and sought to drag him down to a watery grave, but Valnir was far too wily for them and avoided their clutches. A biting chill wind blew down from the north, carrying with it the power of Chaos, filled with magic and illusions to guide the weak-willed to their doom. Again, Valnir prevailed, and pressed onwards into the very borders of the Wastes.

Though he had slain many fell creatures on his quest, nothing that he had faced on his merciless trek could prepare him for the monstrosities lurking in the Chaos Wastes - foul Chaos Spawn, and worse things that awaited him. But even faced with this, the warlord would not abandon his journey. He fought his way through the warbands of champions, the packs of slavering spawn, and even the hosts of daemons in order to continue his search for the font of despair he sought. The denizens of the land were not his only barrier, however, for the very earth warped and writhed around him, creating deadfalls and chasms which deterred his path and sending up noxious fumes that sickened the chieftain. Worse still, Valnir heard the scratching whispers of daemons, mocking him for his quest and telling him to submit and falter. But the chieftain of the Crow Tribe drowned out the jeers - he would finish this quest one way or another.

Onward he staggered, to the great teeth of the Chaos Realm that would lead to birthplace of all decay; as he passed that dark rift he found himself upon an isle of corpse surrounding a massive, rotting tree. Upon its branches was a three-orbed fruit slimy with corruption and crawling with maggots. As he approached, Valnir felt an overwhelming despair take his heart. A feeling so powerful that not even he, so used to suffering and always stoic in his misery, could overcome. Collapsing finally, here at last was the clarity of suffering he sought. Valnir had embraced defeat at last, but rather than giving up his life, he prayed to the Dark Gods to grant him the right to spread the truth of this despair throughout all the lands of men. He had passed his final test, and before him appeared the dread Plague Lord, Nurgle, known amongst the tribes of Norsca as Neiglen, the estuary from which all despair flowed, and he demanded from his servants that they submit only to him while desiring to spread his holy word throughout the world. What man can say what process the gods undertake that marks a man out as their chosen? All that is clear is that Nurgle lavishly bestowed his blessings upon Valnir, transforming him into the Reaper; the highest champion of Nurgle, charged with spreading fear and disease in the name of the Plague God. Bestowed was he a great halberd fixed with morning stars, a weapon bearing all the unholy enchantments the Plague Lord could devise, empowered to devour the very souls of those it struck.

Long and terrible was Valnir's service to the Chaos God of Despair, and terrible indeed was the suffering he meted out in his name. Soon, his name was feared throughout the northern Empire and Kislev, while it was honoured and hailed in the wastes of Norsca. When the great warlord and Everchosen, Asavar Kul, arose to lead the people of the north to war against the south, Valnir joined the army, for no man was higher in the esteem of Nurgle than he. He fought for his patron throughout the many battles of the Great War Against Chaos, including the terrible Siege of Praag, under the leadership of the merciless Engra Deathsword, and the cataclysmic melee of the Battle of Kislev's Gates. In that titanic battle, Valnir fought the Tzar of Kislev, Alexis Romanoff. By some great miracle, the doughty Kislevite ruler managed to cut down the most favoured of Nurgle, but indomitable was Valnir of Norsca, filled with the hellish vitality of his god, he survived the blow. Staggering away from the battlefield, his tribesmen found him and carried him back to his homeland, as was his wish. Here was built a great stone throne from which the Reaper could survey his ancestral lands even in death. But Nurgle would not allow his Chosen to perish, and willed it so that Valnir's body did not die. Indeed, it seemed to regenerate as much as it rotted.

One day, the rotting, bloated form of the champion lurched again to its feet. Thus did Valnir live once more, not dead, nor truly alive, but a daemonic being sustained by the power of Nurgle himself. So it was that his soul returned to its carcass; Valnir the Reaper lived once more. His tribesmen fell to their knees when they saw him, accepting him as their new demi-god, for he was living proof that the God of Plagues was with them. Where Valnir walks, plague and desolation follows in his wake. Rendering his enemies stricken with contagion and easy prey for his Marauders, who cut them down like wheat before the scythe. Terrifying strength lies in his skeletal grip, his blows are immense and his grip is as iron. With every soul he sends to Nurgle his power increases, and the lands of the Empire and Kislev will have to pay a thousandfold to earn his final death.

In life, Valnir was a warrior of incredible strength and resilience. In his new, semi-daemonic existence, it has been magnified a thousandfold, and with he every soul he sends screaming to Nurgle's loving embrace, the Father of Crows sees fit to further empower his beloved son. Valnir's daemonic stamina allows him to arise again from even the deadliest of blows, and his maggot-ridden Chaos Plate allows him unprecedented protection. Valnir wields the monstrous Daemonic flail, the Gatherer of Souls, embued with the corpulent powers of Nurgle. The blessings upon its rusted blades allow it not only to kill painfully, but also to consume the souls of those it strikes. Most of the sustenance is sent Great Nurgle, but it also strengthens Valnir. With every kill, his might is heightened and his blows become all the mightier. Valnir also possess a level of regeneration that is veritably Troll-like, allowing him to shrug off mighty blows. But most deadly are the terrible plagues that follow Valnir in his wake. Wherever he walks, he heralds death and disease. Three have been commonly observed in his battles: