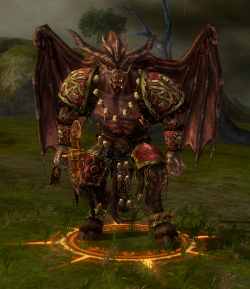 Thorgar the Blooded One, also known as Hroth was a mighty Daemon Prince of Khorne.

Thorgar started his quest as a Chaos champion who fought alongside the warlord Asavar Kul in the Great War Against Chaos. Following Kul's defeated he looked to re-build his forces to launch another attack on The Empire. During this time he is guided by a sorcerer by the name of Sudobaal, who instructed Thorgar to lead his men to a Chaos shrine. After enduring a series of trials set out by the gods, Thorgar obtains the favour and patronage of the chaos pantheon. Sudobaal then instructed Thorgar to locate an elven mage who knows the location of the body of the defeated warlord Kul. During this time he allied with Kasquit, a Skaven Warlock Engineer of clan Skryre. Having angered the skaven council, Kasquit quickly accepts the alliance in order to receive Thorgar's protection, and agrees to help Thorgar locate the mage. As he grew in power Thorgar ended up killing Sudobaal for turning against him. When this happened he was elevated to daemonhood, and subsequently went on to sack of the city of Talabheim.[1]

Thorgar is a character created for the computer game Warhammer: Mark of Chaos. The canon was eventually created in the book by Anthony Reynolds, throughout the book he was referred to as Hroth.