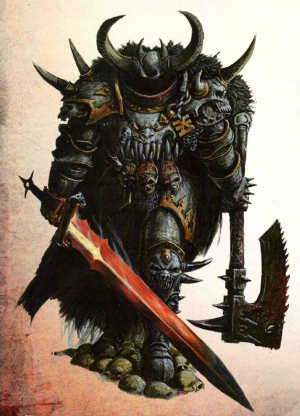 Abrax the Bloody, known also as the Bloody Wanderer, is a Norse Chaos Lord of Khorne renowned for his legendary bloodthirst. Once a warrior of the Norscan village of Heimhal, his savage legend would begin during the terrible hardships of the legendary Blackened Winter, where the winds of Chaos blew violently into Norsca, engulfing the land in roiling clouds of sorcerous corruption. During this time, the Norscans' few crops and livestock died en masse, driving the warlike tribes of the North to slaughter each other in order to control their bleak homeland's diminished resources.[1]

It was during this time that Abrax, then but a young blood, took up arms to defend his village against the ruthless barbarian invaders. His bloody exploits in the long months of battle caught the eye of the Blood God Khorne, who elevated Abrax into one of his greatest champions. Guided by instinct or the dark Will of his god, Abrax found himself wandering a random path to greater and greater glories, such as when he slew the Goreprince and claimed the mighty Daemon Blade Y'Khggan from his dead hands.

Once a young Norse of the village of Heimhal, Abrax's descent into eternal damnation began when the Chaos Wastes began to expand, engulfing the northern lands in the deepest shadows of Chaos. Though Norsca is a land firmly under the control of the Dark Gods, and the hurricane fury of the Winds of Chaos is well known to it, the sheer horror of the Wastes' expansion during this time was so great that the Norsemen dubbed these months "the Blackened Winter". Crops and livestock weathered and died in such numbers that the fractious clans of Norsca were plunged into a horrific civil war in order to attain enough resources to ensure their individual survival.[1]

The menfolk of Heimhal, Abrax among them, prepared themselves to stand fast against the merciless assaults of their savage kinsmen. For hellishly long months, Abrax and his shield-brothers fought a seemingly endless war in order to defend their meagre wealth against the marauders. By the time the thaw had finally come, he was the last warrior standing, his mind so unhinged by the brutality he had witnessed that he could no longer keep himself from killing. Lost to the red fury of the berserkergang, the Norseman could no longer distinguish friend from foe, and fell upon his fellow tribesmen and slaughtered his own village down to the last man, woman and child. Khorne looked upon the slaughter from his Skull Throne pleased, the Bloodfather sent down his dark blessings upon Abrax and claimed him as a new champion. From then on out, the deranged Northman struck out from the carnage of his former home to carve a red legend throughout Norsca.[1]

His mind shattered from the horrors he had witnessed and his body overflowing with infernal might, Abrax wandered a random path guided by whim or instinct to yet greater glory. On the slopes of Splinter Rock he faced down with the Goreprince, wresting from the Daemon Lord his mighty blade Y'Khggan, binding it to his will, and using its unholy edge to spectacularly dismember its former wielder. Upon the fire-swept Steps of Oblivion, above the Howling Gorge, he fought the monstrous Dragon Shurrek, striking the gargantuan head from the beast's scaly neck and claiming its mighty skull for the throne of his god. The sagas record him falling upon entire warbands with screams of hate and rage, exterminating the lesser warriors as easily as he did the villages that happened to lie in his path.[1]

Over time, Abrax the Bloody became famed as an Avatar of Khorne himself - so completely did he embody the mindless wrath of his patron deity. An unstoppable engine of destruction followed for glory, wherever he strode did the followers of the Blood God flock, hoping to win the warlord's favour by pledging axe-oaths to his warlike banner.[1]

Such was the champion's unholy magnetism that he was able to quickly rebuild his following after the events of the clash at the Shrine of a Thousand Eyes. The day after the battle, the Norse warrior hacked his way through the sentry picket of the far-famed Bloodwolf clan, prowling to their encampment and demanding their oaths. The savage Bloodwolves, seeing in Abrax a lord truly touched by Khorne's madness, pledged him their unquestioning allegiance; sealing their oath with the blood of their less faithful fellows in a frenzy of bloodletting before setting out into the frozen wastes alongside their new master.[1]

Pressing southwards from their Norse homeland with all haste, Abrax and his barbarians crested a craggy ridge to find a great crater where a terrible battle between other warriors of Khorne had taken place. Upon seeing Abrax in all his dark glory, the warriors ceased their combat and fell to their knees, hailing the insane Norseman as their new master with a single, deafening roar. From all across Norsca had they come, fighting like daemons for the chance to pledge themselves to the banner of the Bloody Wanderer - Abrax - Chosen of Khorne. So did the warrior's horde grow to massive proportions, and he named them the Slaughtermen of Khorne.[1]

So it passed, and ever greater did Abrax's army grow. As his warhird passed the dreadful Bile Lands, a tribe of Dragon Ogres calling themselves the Sons of Krakanrok too pledged their allegiance with an offering of skulls for their new master. But north of the Gulf of Kislev, Abrax and his Slaughtermen came across the ruins of a Slaaneshi fane where Skullcrushers of Khorne and Chaos Knights were competing for the massacre of a shrieking tide of Slaaneshi cultists. As the last weak body fell, the mounted warriors pledged their victory to the glory of Abrax, and their lives to his murderous cause. By the time this horde of savages and berserk killers had reached the Eerie Downs, they had become an onrushing tide of murderous fury who blackened the earth with blood with their march.[1]

Abrax's chief adversary was the Tzeentchian Sorcerer Lord, Varesh Warptongue. A terrifying and cunning magician, leading a savage cult of devious madmen known as the Pandemoniad. The two Chosen first encountered each other during Abrax's conquest of the Crimson Fields, where Varesh's sudden and spectacular destruction of the Ossified Spire cost Abrax victory over the rotted hosts of Fulgus Flylord, burying the Norscan and his blood-worshipers under tonnes of calcified rubble. Clawing his way from the bloody avalanche, Abrax swore an oath of eternal vengeance against Varesh, swearing that he would claim the skull of the Warptongue, along with that of all his followers, as weregild for his ignominious defeat. Thus began one of the most epic rivalries in the histories of the Northlands.[1]

In the Chasm of Nightmares, Abrax and Varesh faced off in an epic battle, the every earth-shaking clash of their blades letting loose a horde of screaming phantasms whose eternal battles echo throughout the sepulchral chambers of that place to this day as a reflection of the unending hate between Abrax and his foe. At the Battle of Silver Gates, the Warptongue came within a single daemonic syllable of achieving immortality, only for the Red Wanderer to appear and shatter the Crystalline Altar powering his adversary's apotheosis, thus unleashing a horde of slavering Daemons from which both champions barely escaped alive. At the fall of the Slaaneshi kingdom of Gratuita, the Slaughtermen and the Pandemoniad destroyed the entire city, slaughtering furiously through the warband of Profligatrix Persephuna in an attempt to bring each other to battle. On some occasions, the Warptongue would through craft and guile inflict upon the Bloody Wanderer some stinging defeat or mortal wound, while on others, Abrax's sheer bloody-minded determination would win the day and send Varesh and his Pandemoniad fleeing in humbled disarray. It was not until the Battle of the Vale of Corpses, however, that their titanic quarrel was put at last to rest.[1]

The Clash of Evil

It was at the Shrine of Khamesh, nestled deep within the Strigoi kingdom known as the Vale of Corpses, that Abrax and Varesh would settle their grudge once and for all. Varesh had been compelled to ride to the Undead wastes to seek the Skull of Khamesh, a mighty artefact of Chaos, which would usher him on the path of daemonic ascension. While Abrax sought only the opportunity to bring his long time foe to battle at last. Waiting until the Pandemoniad and their allies had engaged the Strigoi armies, the wolves of Khorne charged from the northern slopes with a bloodcurdling roar, promising death to all before them.[1]

Varesh Warptongue and the Pandemoniad channeled a mighty spell, sending torrents of howling warpflame to engulf the Undead horde, including the Carrion King, Urtash. While the Undead horde collapsed, the Pandemoniad readied themselves to meet the furious charge of the Slaughtermen, who smashed into their lines screaming praises to the Bloodfather. Brass axes rose and fell with horrifying swiftness, sending fans of blood to paint the ruined walls of the shrine. Helmeted heads tumbled away on jets of gore as frenzied Northmen screamed unholy supplications to the Blood God, raising every severed head in praise of the Skull Throne.[1]

Suddenly, with the roar like the ending of worlds, Varesh Warptongue's Manticore came thundering upon the battlefield. The sorcerer had until this moment remained aloof from the battle, only investing his mighty powers where it would turn the strategic tide of the battle. But now, the time had come to take the field, for the Skull of Khamesh was within sight. Entropic might filled his frame as his every ruinous blow sent armoured bodies sailing through the air. Yet a familiar roar of berserker fury filled the air, as a hulking brass-armoured form exploded from the ancient stone walls of the shrine. Bearing down with world-ending blows upon his hated nemesis, Abrax the Bloody brought the Warptongue at last to a contest of champions.[1]

Abrax swung Y'Khggan upon Varesh's Manticore in a terrifying arc that severed the beast's head in a single strike. Varesh leapt from his dying steed and crossed blades with the Norscan. The sorcerer unleashed a blast of screaming warpfire, only to watch in horror as it flowed across the laughing Norseman's armour as if it were water. Khorne had blessed his champion greatly since last they met. With a trio of hammering blows, Abrax drove Varesh to his knees and struck his head from his shoulders, settling their ancient blood-feud at last.[1]

In his mortal existence, the young warrior who would become Abrax the Bloody was a tireless defender of his people. Though dedicated to the Dark Gods, the young blood nonetheless was prepared to give his life in defense of his village, holding the line against his tribal enemies for months on end. Alas, the sheer brutality of the ordeal serve to shatter the warrior's sanity. Lost completely to the unholy fury that dwells in the blood of his people, he became a blood-maddened slaughterer, representing his foul deity in pure microcosm.[1]

An almost elemental force of violence, Abrax was less a warlord and more a gore-drenched berserker. By his indomitable will and unmatched strength in battle, he became a Chosen of undisputed renown. Ruling his Slaughtermen with an iron fist and brooking no challenge to his command, he was a dark warrior king of unholy martial majesty. He was driven by his hatred of Varesh Warptongue, and was single-minded his quest to revenge himself on his hated nemesis.[1]