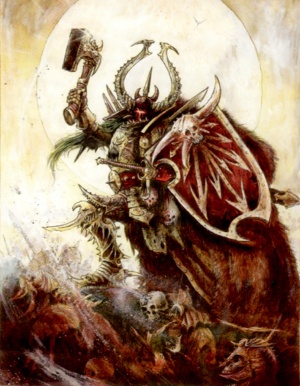 Harald Hammerstorm is a Chaos Champion who spent years roaming the Chaos Wastes slaughtering any enemies he could find.

He is known also as the eternal nemesis of the undead. Harald is absolutely fearless, and his hammer is a powerful artifact that can kill supernatural opponents with a single blow. The aura of chaos that surrounds him is so strong that his usually fearless undead opponents are known to flee and suffer the mortal emotion of fear. [1a]

He is a legend among the Norse and Kurgan, known as one of the greatest fighters in the northern lands , he became famous when he killed the daemon Mathrag Brainmangler during the Battle of Khorsvold, striking its head from its shoulders with a single blow of his war hammer. [1a]

Tales are told of how, on a freezing Midwinter day, he arrived with his tribe of warriors at the ruins of Vorshgar in the Chaos Wastes seeking treasure. As they descended into its depths, ancient undead warriors were awoken and fell upon the invaders. [1a]

Although they fought their way clear, the dead followed, the snow melting as the ruins glowed with magical energy. Harald turned and faced the advancing skeletons and as he began to smash them asunder, he was empowered by the gods. For the next day and night he and his men fought on until only piles of bones remained of the undead. [1a]

Since that day, he has had a particular hatred for the living dead.

During the End Times, Harald finally met an undead enemy he could not best when the Vampire Lord Vlad von Carstein was able to slay the warrior after a fearsome duel.

Harald has gained the nickname "Harry the Hammer" amongst many Warhammer players and Games Workshop.