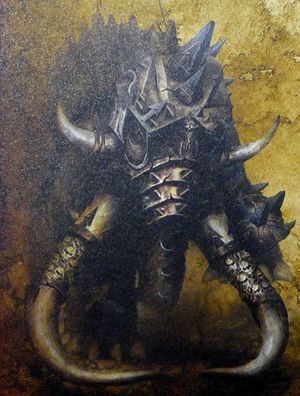 Chaos War Mammoths are huge creatures that the Warriors of Chaos use as powerul mounts and living war machines. [1a]

Massive and belligerent beasts that inhabit the far north of the Old World that cause destruction whereever they go. This is greatly magnified when they have young and travel in family based herds. [1a]

Many northern tribes worship them as living totems of power and might and those that can use magic or the favourof a god to bring them into their tribe are given great honour and respect. It is the Dolgan who have had most success in this and their greatest warriors ride into battle on fighting platforms atop them whilst some have war-alters to the Dark Gods mounted on them. [1a]