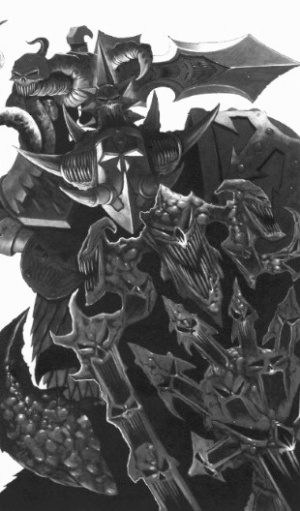 Count Mordrek the Damned is a legendary and nigh on immortal Chaos Champion.[1a]

Count Mordrek was once a noble man, who was tempted by the power of Chaos. Mordrek was "blessed" with the gift of Immortality, his body would constantly mutate under his ornate Chaos Armour, alowing him to never truly die.[1a]

Mordrek has been slain many times, only to rise up once more to serve the gods, he wandered the old world doing their bidding and slaughtering all who opposed their will. Whilst most Chaos Champions would view this as a great gift, Mordrek saw it as a curse he longed to be free of. Those he slew under his blade turned into monstrous Chaos Spawn and gained the oblivion he so desperatly craved, nobody knew what his destiny was or what the gods intented for him. Such was the fate of Count Mordrek the Damned.[1a]

Mordrek was the son of the Reikland Emperor. [2a]

In 1882 IC Count Mordrek led an army to recapture Brass Keep leading an army of Sigmarites from Middenland. Whilst ruling over the castle, he became tainted and embraced the Gods of Chaos.[2a]

Mordrek met his destiny during the End Times, he fought against Valten, the chosen of Sigmar and through his holy might, Mordrek's curse was finally undone.

Mordrek was a mighty Chaos Champion for none could truly kill him and he could withstand the most deadly of wounds.