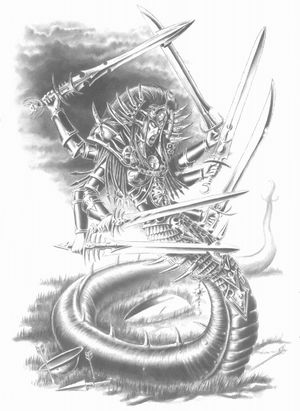 Dechala the Denied One is a Elven Chaos Champion of Slaanesh and mistress of the Tormentors Warband. [1a][2][3a]

Rather than legs, Dechala now has the sinuous and lithe body of a snake with a multi-headed tail dripping with mind sapping poison. Her skin is milk-white and smooth whilst her deep blue glowing eyes promise both pain and pleasure. [1a] She had three pairs of arms. [3a]

In battle she dances to amuse her patron whilst her swords whistle eerily as she moves, often entrapping her opponents as she cuts them to pieces. [1a]

Her exact origins are unknown but it is said she was once an Elf Princess and is blessed in many ways by Slaanesh with inhuman beauty and agelessness. [1a]

On her face is single scar inflicted by a Champion of Khorne, causing her to hate all servants of the Blood God. [1a]

Dechala seeks freedom from all restraints of law and order for not just herself but for all beings and is served by a horde of slaves.[1a]