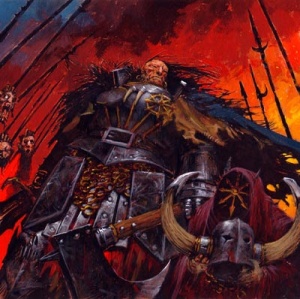 Crom the Conqueror, also known as Vardek Crom, is the Herald and personal champion of Archaon. [2a]

To the east of the World's Edge Mountains and north of the Mountains of Mourn, the Steppes stretch from the civilised lands of men to the Chaos Wastes. These vast, rolling plains of grass and tundra are home to the Kurgan, savage tribes of nomadic warriors who spend their lives in battle to prove their might before the Ciods. Born into a land constantly riven by warfare, the people of the north must be strong warriors lest they meet an early and brutal end in battle. [1a]

Crom the Conqueror is of the Kul. A tribe of the Kurgan people, the Kul stake their claim on the lands above the World's Edge Mountains and to the east of the Sea of Chaos, from where they launch brutal raids on their neighbouring tribes, sometimes travelling as far as Cathay or the Empire in their quest for plunder. Possessed of an ambition that burned like fire and a keen warrior's skill, Crom bested his chieftain in a leadership challenge before his twentieth year. Crom's cunning and prowess ensured that the Kul rose to great renown, a position built on the backs of slaves, and paid for with a hoard of stolen wealth. Before another ten winters had passed Crom was one of mightiest kings the Steppes had ever known, and it was then that the dreams started. [1a]

Night after night, Crom dreamt of the future, of a world drowning in a tide of Chaos for the glory of the Gods. He saw a dark figure silhouetted against a red sky, a blade sheathed in golden fire raised above its head. The dreams became ever more vivid, and Crom became convinced that it was a message from the Gods and a clue to his destiny; but who was this figure? Was it his own destiny to claim the world for the Ciods, or was there another, even mightier than he? Obsessed with the meaning of the dreams, Crom spoke with the sorcerers of his tribe but when they could not provide him with answers, his mood became dark and brooding. [1a]

When news came to him of a company of armoured knights marching over his lands uninvited, Crom was furious. Angered by the slight to his sovereignty and made reckless by his infuriating dreams, he immediately rode forth to challenge the intruders. Catching sight of the knights across the sweeping plains he bellowed challenges at them until eventually their dark leader raised a hand, stopping his riders and turning back. [1a]

The knights spurred towards the king of the Kul, who soon found himself encircled. Though outnumbered many times over, Crom did not back down and demanded to know who dared cross his lands without his permission. The leader of the knights replied simply that his name was Archaon, and he sought the six treasures of Chaos. As far as Crom was concerned, for Archaon to make such a statement as this was the ultimate blasphemy. Drawing his sword Crom challenged Archaon to single combat and to prove that he was indeed he chosen of the Gods. [1a]

Archaon's shoulders shook slightly with silent laughter and gestured to one of his riders. Seemingly unhindered by the great weight of armour upon his back, the knight leapt down from his horse and charged at Crom. Crom simply grinned, and in a single motion battered the warrior's sword aside before backswinging his blade, severing the man's head. Crying out in triumph he-demanded once more that Archaon face him. Archaon said nothing, but gestured again. Another of the armoured warriors stepped forwards; again Crom cut him down with ease. A dozen times more Archaon sent forth his champions, and each time Crom proved victorious, the blood of the knights spilt upon the barren Steppes. The Kul ruler was in a fury, demanding to know why Archaon refused to fight, when the huge knight finally dismounted. Sensing that this was to be a fight worthy of his skills, Crom did not allow the knight to even draw his blade before rushing headlong towards him, his sword swinging in vicious arcs. [1a]

At first the dark knight gave ground before the enraged king, beating aside the ferocious attacks with his shield, seemingly unable to draw his own weapon in the face of such skill and ferocity. Crom pressed on, believing that he had the measure of his foe, but as Archaon reached the ring of knights, he gave ground no further and with a single sweep of his shield swept the blade from Crom's hand. Without pause, Crom flung himself weaponless at his foe but as fast as he was, Archaon was faster, his right hand closing in a vice-like grip about Crom's throat. As he lifted the struggling Kul high off the ground, Archaon abandoned his shield and drew his sword, the blade easing from the scabbard. [1a]

Struck with awe, Crom instantly stopped his struggles, for the blade shone with a golden flame that danced across runes inscribed so finely as to be barely readable. The serrated edge of the sword seemed to move and flow even as he watched, and a faint moaning emanated from the desperate struggles of an imprisoned daemon. Still holding the king at arm's length, Archaon told him of the quest for the treasures. The Sword he possessed already and the Eye and the Mark. Still he needed the Steed, the Armour and the Crown. Crom had been tested and found to be a mighty warrior; Archaon bade Crom accompany him for the remainder of his journey. Crom realised that Archaon could truly be the figure from his dreams, the chosen of the Gods and of the prophecy he who would bring about the Storm of Chaos. The Gods could not have given Crom greater honour and, leaving his people, he joined Archaon's band, the Swords of Chaos, and Crom's tale passed into the myths of the Kul. Over the decades spanned by that epic quest, Crom's fervour and belief in Archaon grew ever stronger. Soon he became the most loyal and devoted of his Lord's companions, travelling far and wide in his lord's name - a herald for the Lord of the End Times. [1a]

As the day of prophecy drew near, Crom took it upon himself to create an army worthy of the Lord of the End Times and Crom returned to his homeland for the first time in many years. He strode brazenly into the tent of the king of his people demanding that the Kul swear loyalty to Archaon and the End Times. When the king, himself a mighty warrior, challenged Crom he was cut down like a mere boy. In awe of Crom and his words, and remembering the legends of their tribe, the assembled chieftains of the Kul acknowledged him with deafening cheers and swore themselves to his cause. [1a]

Under Crom's leadership once more, the Kul burst forth from their own lands in a whirlwind of conquest. Those chieftains who would not join the cause were slain by Crom, their armies humbled in battle, and the people of their tribes pledged to obey Archaon as their ruler and Crom as his Herald. As the ranks swelled with the peoples of the conquered tribes, the horde swept eastwards across the plains. Crom's following was the largest army ever assembled in the east, the warriors fanatical in their desire to crush all before them in the name of their Gods. [1a]

When finally the Conqueror was satisfied with the strength of the force at his command he led his army south, leaving the open plains of the Steppes for the rocky, greenskin-infested lands below. The lands of men would be attacked not only from the north, but also from the east, each incursion alone more mighty than any that had come before. Truly the time of mortals was at an end and the Storm of Chaos was upon the world. [1a]

Vardek was dispatched lead a Kurgan horde across the Dark Lands, fighting their way through the greenskins of Grimgor Ironhide to threaten Averland, Ostermark and Stirland with invasion.[2a]

During the events of the End Times Crom was slain by Valten, the champion of Sigmar.

Crom is supremley skilled in various forms of combat, able to use his formidable abilities to nuilfy the advantage even magical weapons give his opponents. [2a]