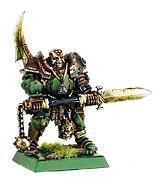 Feytor the Tainted, was one of Archaon's Chosen Lieutenants. A powerful and bloated Chaos Champion of Nurgle, Feytor led the diseased and plague ridden portion of Archaon's forces.[1a]

Feytor was a farmer's son born in the northwestern province of the Empire. Feytor's father had recently died, and so he had to follow his footsteps as the eldest son, though he was not even 20 years old. Life was hard and when the worst winter in decades had begun, life became even harder. The caravans did not come through, and bandits roamed the wilderness.

The food was scarce and often spoiled, and although it seemed as if it could not get worse, it did. An epidemic broke out. It destroyed entire villages within a few days. Then one of Feytor's younger siblings showed signs of the plague. Immediately, all the neighbors went to Wolf Castle to seek shelter. But Feytor's family remained and cared for the child, they did not want to lose their few possessions. And so they were infected. In their distress, Feytor and his mother begged all and any gods to save her and her surviving children from death. - A God heard indeed, and they survived the disease. After a few days the child could even run again, even if the signs of the plague did not end. Feytor also saw the plague. He had deep eye-rings, pale skin, and bumps all over his body.

Feytor and his family were expelled because no one wanted to have anything to do with them and the neighbors considered them to be pest-carriers. They were hunted out of the village. During the hike Feytor found that his skin and his flesh had become much more resistant to cold and injuries.

They finally hid themselves in the wilderness. They sought refuge in a cave and lived on the fruits of the forest and the yield of Feytors poaching. One day when Feytor returned from hunting, his discovered his family slain before soldiers of the Empire. He was furious at the murderers of his family went insane with unrestrained rage and grief over the loss. Thanks to the power his diseases had given to him , he was to kill every soldier and even survive the gaping wounds they had inflicted on him, before he fled farther and farther to the north. When he had killed those, who had taken the last thing that still linked him to the human civilization, he attained Nurgles admiration, becoming his Champion.

Feytor reached Norsca where the indigenous Norse tribe known as the Wolf Brothers dwelt. The Norsemen beleived the sickly man from the south would not survive the next winter, and so the and left him to himself. He taught the barbarians better, because he was strong and tough through the gifts of his master. After some time they put him to the test, and when he defeated the strongest warrior in two-fights, he was allowed to join them. The shaman of the wolf brothers told him that it was Nurgle that made him so strong. He called out the Jarl Svolos Wolf for single combat and killed him in a duel. From then on he led the Wolf brothers into puetrified perfection.

He searched the villages of the Northmen, and demanded that the men should serve his god of disease and pay tribute. The Norse quickly recognized that it was a mistake not to submit: the tribes were beaten with plague, where the cattle fell ill and died, and the harvest spoiled in barren fields. Soon he had several surrounding clans and tribes convinced him on behalf Nurgle to raid their neighbors, weakened by Nurgle gifts they were easy victims.

Feytor enlarged his territory on and on until one day a dark star appeared which showed him the way to the lands of the Empire. He received visions from Nurgle. Visions in which he was ordered to join Archaon's march against the Empire. When he arrived, the Everchosen was greatly impressed by the massive and bloated champion of disease, making him his lieutenant representing Nurgle.