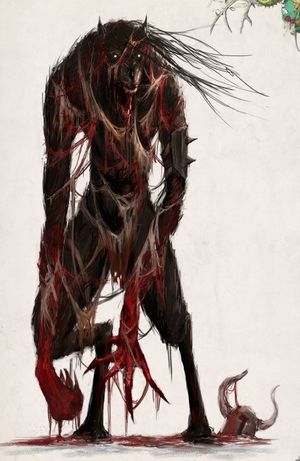 Skin Wolves are powerful canine monsters, Northmen mutated by bearing the blood of a chaotic wolf. Skin Wolves take to the battlefield to glut themselves on the raw and dripping gore of their victims.

Many are the dark horrors of twisted flesh and nightmares made real that the Ruinous Powers have visited upon the world; few though are as strange as the Skin Wolves. Witch-cursed and Chaos-tainted, these creatures are half-feral and subject to savage appetites. They were previously men and women who carried within them the tainted blood of the mutated beast, which was somehow unleashed. Half-insane with insatiable hunger, a Skin Wolf has shredded flaps of skin and chunks of bloody gristle clinging to it, left behind by the unfortunate individual who the fully-formed humanoid wolf-thing ripped itself from. It is these clinging shrouds of skin that give the beasts their common name.