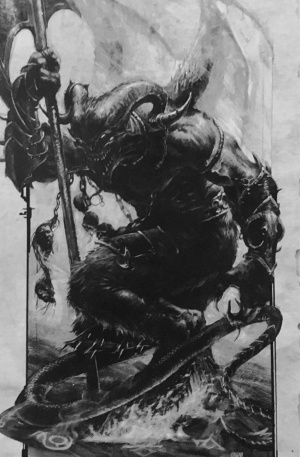 The Scourge of the South.

Grydal, Scourge of the South is a great Norscan Chieftain [1a]and an Exalted Daemon of Khorne.

Urlf is the chieftain of the Snaegr tribe, and a direct descendent of Urlfdaemonkin, a mighty Daemon Prince who they worshiped as a god. The Snaegr were preparing for war, and under the fell Moon of Urlf, he saw a chance to gain great power. Summoning his great forefather, Grydal asked the mighty daemon to grant him his blessing, allowing him to ride to war as an avatar of destruction. [1a]

The deal was made, and the Lord of the Snaegr stepped forth into the runic circle, Urlf reached out a massive claw and touched Grydal's forehead, a sudden rush of power sent Grydal flying through the air as if struck by a bolt of lightning. He rose from the ground, his head pounding and his muscles aching with an agony a hundred times worse than any axe stroke he had ever suffered. Urlf was gone and the ground was blackened as if by fire, grydal noticed a bitter taint to the air that he had never smelled before. Every eye in the tribe was upon him and every mouth silently agape. Grydal's mighty axe lay where it had fallen and he reached out to take it, noticing for the first time the furrow of exposed flesh that ran across his forearm in the crude shape of a skull- the mark of Khorne. His hands closed around the axe - hands that were his own and yet no longer the strong, broad hands that he had borne. These were black and scaly with long taloned fingers, claws very like those of Urlfdaemonkin. As he grasped the axe he felt a a surge of energy within his breast and his head cleared. He rose to his full height - seemingly greater than before - and looked upon his tribe with a new sense of purpose. He felt strong, he felt powerful, and he knew he carried the blessing of his god as well as his mark. The Exalted Daemon raised the axe above his head and roared. The bargain had been made.[1a]