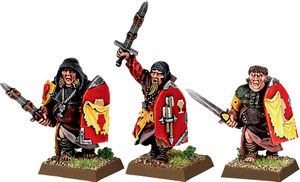 A trio of Battle Pilgrims.[1]

Battle Pilgrims are people fanatically devoted to protecting Grail Knights, as the latter are the chosen of the Lady of the Lake, the goddess that embodies the spirit of Bretonnia and thus are renowned as living saints. This fanaticism keeps them in battle even where many knights would retreat. Furthermore, while they receive no training with their modest equipment, that same fanaticism makes them determined to reach their enemies and so helps them through.[1]

Grail Knights bear these followers with a dutiful resignation that borders on the stoic, though they endeavor not to encourage their self-appointed apostles. This is a vain hope, for even the merest word or gesture is seized upon as an act of great import and eagerly immortalized in tales and discordant song. If a Grail Knight is unfortunate enough to fall in battle his devoted followers will swarm over his corpse, picking it clean of anything that could bear the Blessing of the Lady.[1]

Battle Pilgrims would also guard Grail Reliquaes, should any be present on the battlefield.[2]

One of the greatest bands of Battle Pilgrims, are the Holy Wardens of La Maisontaal.