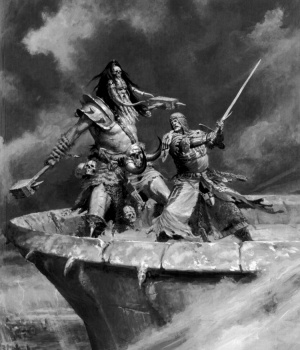 Marcus of Bordeleaux was the third of the mighty Grail Companions of Gilles le Breton. A brave and stoic warrior, Marcus took to the field undaunted by his enemies.

Marcus, the lord of Bordeleaux in 977 IC, was said to have fought side by side with Manann himself in driving raiders from his coastline, and his heraldry - the tri-forked badge of office distinctive of the sea-god, symbolised the strong link those of his line have with the tempestuous deity of the seas.

Marcus joined the Grail Companions of Gilles le Breton along with Fredemund of Aquitaine when the lords of Bastonne, Mousillon and Lyonesse came to their aid and defeated the greenskins that scoured their lands in the first of the Twelve Great Battles.

Fighting side by side with Gilles and the other Companions, Marcus took part in all the other Great Battles, but gained particular renown at the Tenth one, defending Castle L'Anguille from the Skaelings of Norsca. After weeks of combat, in desperation, Lord Marcus threw down his challenge to the fell lord of the Norse, the towering giant Svengar. In his pride, Svengar would not refuse, and the warriors met atop the towering lighthouse of L'Anguille, built by Elves. Cloud roiled and storm lashed as the combatants fought, the elements themselves conspiring to aid the fearsome twin hammers of Svengar.

After a long duel, Marcus finally opened his foe's guard, and struck his opponent with a blow of such might he fell in twain to the rocks below. In respect of the warrior skills of the Bretonnian lords, the Norse took sail back to their icy homelands, and L'Anguille was saved.

After the securing of all the lands of the Bretonni tribes, a great meeting took place in the home of Folgar of Artois. Here, the formal dukedoms were created, and the Bretonnian calendar was introduced - thus, year 979 of the Imperial Calendar is considered year 1 of the Bretonnian one. Each of the great lords of the Bretonni, the fourteen Grail Companions, including Gilles le Breton, were named Dukes. The Dukes swore oaths of allegiance, and Bretonnia was formed.