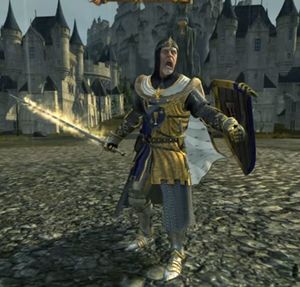 Paladins, also known as Paladins of the Realm, are mighty champions and heroes of Bretonnia.[3a]

Paladins are mighty Bretonnian knights who have risen above their comrades through experience and martial might, they have performed great deeds on the battlefield and defeated particularly dangerous foes. Their reputation precedes them, being every bit as deadly as the greatest heroes of the Empire, - often even more so. Some might be noble Knights of the Realm, whilst others may even be superhuman Grail Knights. Some of the Paladins are also blessed with having a Pegasus as their mount and are known to wield enchanted weapons and armor. [1][2]

Others were even known to be blessed with minor magical gifts from The Lady, such as a halo of light. Although not quite as dangerous as a Bretonnian Lord of the same knightly caste, they are still forces of deadly inspiration upon the battlefield. They are generally of middling rank amongst nobles, although some hold higher ranks such as Earl or may be Baron of a lesser fief. Paladins often act as a more influential lords personal champion, helping command their armies and defending their leader. Whenver one of these heroes enters a town, his presence will be known within minutes, news of his arrival spreading through the crowded streets like wildfire amongst the commoners, who will flock to get a glimpse of one of Bretonnia's heroes.[1][2]

Whenever a Bretonnian army assembles, rules of chivalry oblige them to task a Paladin with carrying a proud banner of the force, other Paladins will act as leaders and champions seeking out the mightiest of foes and inspiring their troops.[1]