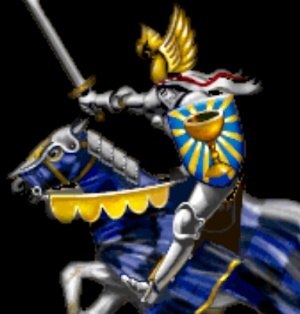 Tristan de la Tour was a mighty Grail Knight of Bretonnia, commanding the most elite troops of the coalition army that destroyed the Black Grail Knights.

Tristan was tasked by King Louen himself with assisting a mighty alliance comprised of troops from the Empire and Kislev, alongside Dwarfs and Wood Elves. Led by the Mercenary force known as the Grudgebringers, this massive army would be sent to the dark city of Mousillon, tasked with destroying one of the Old World's greatest threats, an army of the Undead, led by the resurrected corpses of Tristan's fellow Grail Knights.

Tristan and his companions proved to be the most powerful troops in the coalition army, their skill in combat was seen as being extraordinary, and they fought determinedly. In what would become known as the Battle of Mousillon, Tristan and his allies fought against the undead hordes that spilled from the city's dark gates, and eventually engaged the Black Grail itself. The coalition army was ultimately successful in defeating the Black Grail Knights, although at the cost of many lives. With his task complete, Tristan later led his men to Parravon, with the eternal gratitude of both the Grudgebringers and Bretonnia itself.