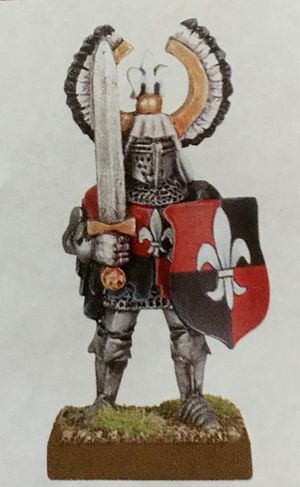 Lord Balderin Beastslayer was a mighty Bretonnian Lord who became renowned as a defender of the weak and for his actions during The Seige of L'Anguille.

A massive Dark Elf fleet had been terrorising the Bretonnian coastline for many weeks, razing villages to the ground, capturing slaves and sinking merchant vessals. One Bretonnian Lord swore a solemn oath to protect the people of his land, for he was Lord Balderin Beastslayer, a powerful knight who had made his name defending those in dire need. [1a]

Luring the massive Dark Elf army into his domain, Balderin goaded them into beseiging his keep, realising that it was the best chance of slowing and weakening the vast Dark Elf hordes. He and his men, horribly outnumbered, prepared for the worst. Then it happened...a green mist materialised from the woods, the Green Knight and a small army of Wood Elves had come to his aid. Ready to share in his sacrifice for Bretonnia. [1a]

Monstrous Hydras stood at the gates of the keep, and though they were confronted by hideous monsters and an innumerable horde of evil, the valiant Knights of the Realm charged from the castle. The Green Knight rode into the enemy, reaping a glorius tally of destruction whilst the Wood Elves. Bretonnian knights struggled against the sheer number of Dark Elves and their monsters, fighting until the last man.

Atop the castle gate Balderin, alongside a holy Grail Reliquae, was beset by a horde of Witch Elves. The Bretonnian Lord stood firm, slaughtering all who tried to get past him, he would not flee even against such numbers. Sensing a chance at taking the keep, hordes of vile Corsairs joined the fray, against these combined forces the Beastslayer was slowly weakened and slain..but not before slaying the Witch Elves to the last fighter.

With the loss of Lord Balderin, the confidence of the Bretonnians ebbed, never before had the walls of his fortress been breached by the impure...the battle was lost, but Balderin's sacrifice had weakened the Elves long enough for Bretonnia to prepare for war...

As a Bretonnian Lord, Balderin was expected to be a skilled general and fierce warrior. He was capable of slaughtering an entire unit of Witch Elves to a single hag and killing many Corsairs before finally falling in battle. he was one of many to Heroes to have been entrusted with some of Bretonnia's greatest artefacts...