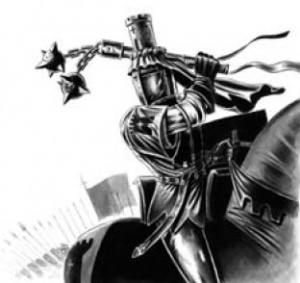 The Castellan of Quenelles.

Guillaume de Grenouille, was Castellan of Quenelles and a particularly large and brutal Bretonnian Lord.

Guillaume was a huge man with a large scar across his face and was notorious for his uncontrollable temper. His duty was to guard the lands of Quenelles for the Duke, which he did with the utmost loyalty, in battle he wielded a large triple-headed Morning Star, which he used to devastating effect. He commanded a large army of Men-at-Arms, Peasant Archers and Squires, all of whom usually feared the large Castellan more than the enemy.

It was Guillaume who oversaw the great Tourney of Quenelles, attended by heroic knights from across the land. When the Wood Elf forces of Prince Athelwyn arrived and challenged the Knights of Bretonnia to a challenge of skill, Guillaume accepted. The Castellan selected his best knights, including the young Agravain de Beau Quest to face the Elves in honourable combat. The Bretonnian's were victorious but it was soon revealed that the Elves had used the competition as a ruse. Athelwyn's men had stolen the sacred Chalice of Chanterelle, in a blind rage Guillaume mustered his retinue and set forth to pursue the traitorous elves.

The Castellan led his men into a reckless charge against the elven army. Whilst his men fought against the enemy spearmen, Guillaume, always a man to lead by example and now in an unstoppable rage, spurred his charger into the Wood Elf Archers rallying in front of him. The large knight shrugged off their arrows and crashed into their ranks, taking on all of them single handed as he flailed at them with his morning star. His heroism caused the rest of his retinue to redouble their efforts, rallying to his banner.

But it was too late. In the fading light, the sacred chalice had already been stolen and whisked away by Warhawk Riders suddenly swooping from the sky.

The Castellan felt that his honour was so slighted by the theft, that he begged the Duke to give him leave to join the perilous quest into Athel Loren. The Duke replied that he could not spare such a good man from his retinue and also that the Castellan was needed to protect Quenelles from any other attacks, selecting the fearsome Grail Knight, Aloys de Montjoie to lead the quest instead. Guillaume's single-handed charge against the elves had been above and beyond the call of duty, and his honour was not in question.