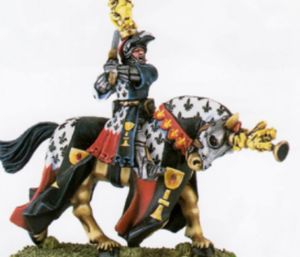 Aloys de Montjoie was a Grail Knight and a Baron of Quenelles.

Aloys de Montjoie was known as a very arrogant and impetuous knight, but also as religious and brave, respected throughout Quenelles as a paragon of Bretonnian virtue. After successfully completing the Grail Quest, he returned having personally recaptured various sacred relics. He then made it his duty to guard the holy Grail Chapel of Quenelles. He was known to ride into battle upon a Barded Warhorse and wielded a massive two-handed broadsword, which he used to devastating effect.

During the annual Quenelles tournament, Wood Elves had attented as guests in order to steal an artifact, betraying the Bretonnians and unleashing a beast upon the crowd as a distraction. Plans took place as to what was to be done, with Aloys involved. The Duke decided that a pilgrim was to travel to the lost Challot Grail Chapel and demand permanent access, with Aloys de Montjoie leading the expedition.

When they entered the forest of Loren, an Elven sorcerer Yolath stood in their way, ALoys demanded that the Elves pay recompense for their cowardly actions, and allow his men to make pilgrimage into the Chapel, when the sorcerer refused Aloys simply pushed him aside and continued. Ignoring the Sorcerer's prior warnings, the Bretonnians continued to ride. As they approached the Grail Chapel, they were attacked by hulking Tree Kin with a large group of forest spirits and elves. The battle was costly, but reinforcements under the guidance of a Questing Knight, Agravain de Beau Quest, these much needed reinforcements helped them continue their journey. Aloys then swore service to Agravain, seeing that the knight was a worthy leader and had a destiny to fulfill.

In the ensuing Battle of the Tree of Shields, Aloys led a sortie of five Grail Knights into the center of battle, they would be greatly outnumbered by the Wood Elves elite units, but charged into battle fearlessly. Agravain, however, was to lead his forces around the flanks to secure the sacred chapel. When Aloys saw the elven general Athelwyn, the enraged Baron could not restrain himself and rode into the attack. He proved far deadlier than the Highborn, hewing the warrior down with several blows from his mighty sword. Athelwyn's Highborn bodyguards and Glade Riders were able to surround Aloys during his duel, the Baron fought bravely against this tide of elite warriors, but eventually fell. The Bretonnians won the battle, but the cost had been great, Aloys and his five Grail Knights were found dead, surrounded by the bodies of Elven princes and Glade Guard, they had fought against great odds to ensure victory for the Bretonnians.

Aloys and the rest of these fallen heroes were buried around the very Grail Chapel they had fought to recapture. When Agravain finally supped from the Grail he chose to become the chapels guardian, forever protecting Aloys tomb.