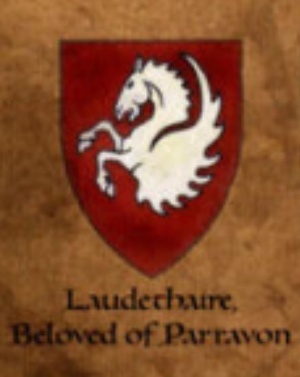 The Beloved of Parravon's Heraldry.

Laudethaire, Beloved of Parravon was a famous Pegasus Knight, whose impressive skill in battle was only matched by his arrogance and vanity

Laudethaire was a young knight known around Bretonnia for his skill in combat, good looks and an arrogance almost unmatched. Women flocked to him and many nobles respected him, much to the ire of Calard of Garamont and many other young knights. He would become a strenuous ally of both Calard and his brother Bertelis, aiding both in combat whilst looking upon them and other knights as beneath him.

It was Laudethaire that discovered a noble lady of Bretonnia was held captive by chaos forces. Alongside Calard and Bertelis, he led an attack into the heart of a Norscan encampent to rescue her. It was revealed that this woman was none other than Elisabet, the former fiance of Calard and that her captor was none other than Egil Styrbjorn, one of the mightiest Chaos Lords in existance. The rescue of Elisabet resulted in even more fame for Laudethaire, adding to his already impressive list of feats and fueling his sense of greatness. Elisabet however was pregnant with the Norcans child, and Styrbjorn was leading an army to Bretonnia to retrieve him...

During the invasion of Lyonesse, Laudethaire led his pegasus knights into the thick of battle, killing many Norscan warriors. And infuriating Calard with his arrogance. It was when he came against a massive Chaos Spawn that he was finally stopped. Laudethaire struck the abomination with his lance causing the beast to grab his noble pegasus and tear open its throat, landing next to a Norscan warrior. Laudethaire wrestled with the man before they crashed through a window overlooking the brutal ocean below.

Laudethaire had survived the fall, hanging by one hand he spotted a peasant cowering above, Chlod an aqquaintance of Calard and a petty criminal. Ordering the peasant to help him, he was inches away from being rescued when he spat a boastful insult. Chlod lifted his foot, brought it down and sent Laudethaire plummeting into the icy ocean below.