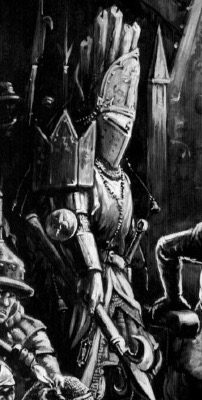 Amalric, Bane of the Undead.

Sir Amalric of Gaudaron, also known as the Bane of the Undead, was a famed Grail Knight of Bretonnia. [1b]

Of all the Grail Knighta in the service of Bretonnia, few were so famed as Sir Amalric of Gaudaron Keep, scourge of the undying and blessed champion of the Lady of the Lake. Almaric spent his early years as a knight in the service of Baron Prithard of Carcassonne, one warrior amongst many in the Baron's service. Prithard, whilst a noble and just lord, needed the support of worthy knights to defend his domains, for though well schooled in the courtly arts, the skills of diplomacy forever eluded him. [1b]

As such he often found himself at odds with his peers and could rely on little support from them. Though young, Amalric swiftly proved his impressive skill at arms, and he was soon made a full Knight of the Realm and appointed master of Guadaron Keep, an old but serviceable castle in the foothills of the Vaults. [1b]

It was shortly after the young knight was installed in his domains, that the accursed Liche, Hardakh, rose from his crypt deep within the Vaults, and led an army of mouldering corpses into the southern Carcassonne territories. Amalric was one of many bold knights who met with Hardakh upon the field of battle. It seemed that the blessing of the Lady flowed through Amalric with unprecedented vigor, for the undead warriors could not stand before him. Wherever Amalric rode, the Necromancer's evil magics seemed to ebb and fade. Skeletal warriors collapsed into dust and spectral hosts dispersed into the wind at his coming. [1b]

Even the Vampire, Sir Morten the Black, scourge upon the lands of Gaudaron for over 200 years, aged and died even as he offered challenge to Amalric. With his army crumbling about him and the men of Bretonnia emboldened, Hardakh had no choice but to retreat from battle (though within a league, his undead form suffered a short but pointed encounter with Baron Prithard's favorite Hippogryph). Recognising the instrumental role that Amalric had played in the victory, the Baron offered him rank and great wealth. Such a reward would have brought a new age of comfort on Amalric's impoverished family. Yet, spurred on by visions and faith, the young knight chose instead to commit himself to the parth of the Lady. [1b]

To this day, ballads are still sung of the Quest of Sir Amalric - largely on the insistence of his family who benefitted greatly from his fame. Though some of the claims made of Amalric's travels are mythical - he did not engage in a game of riddles with one of the fey folk - or embellished - the Chaos Champion Karnak had merely three heads, not five - he has still performed many great deeds. On the slopes of the Grey Mountains, Amalric beheaded the ferocious Beastlord Shadeflench and scattered his followers. [1b]

It was Amalric who single-handedly defended the Tower Perilous from Goblin raiders, and he who twice defeated and slew the Wight King, Bracht the Eternal. Ultimately, with the blessing of the Lady as his guide and companion. Amalric's quest was was a successful one. [1b]

On the banks of the Brienne, Amalric supped from the Grail and truly became the chosen of the Lady of the Lake. Little was he to know that the greatest trial of his life was yet to await him, for shortly after, the lady bade him to ride deep into the fey and dangerous forest of Athel Loren, where he would confront one of the most powerful Necromancers to ever walk the Old World Heinrich Kemmler [1a] at the Battle of the Glades in 2497 IC [1b]

Amalric met his end during the End Times. The mighty warrior was able defend Gaudaron keep into holding out against a massive Skaven army for weeks. Eventually the numbers became overwhelming, Amalric retreated towards Brionne, but was cut off by a horde of Clan Eshin assassins and killed. Like all Grail Knights, Amalric could not truly die, his soul being transported to a realm of the Lady's making. Part of her plan to save humanity.

Amalric was an incredibly powerful warror, capable of destroying undead enemies without even lifting his weapon, the holy aura that surrounded him was known as the Bane of the Undead. Which when added to his abilities as a Grail Knight, made him even deadlier.[1b]