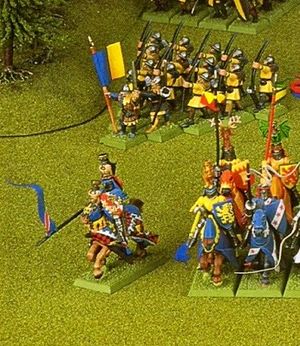 Francois le Noir, was the Duke of Lyonesse during the early years of Louen Leoncoeur's rule. A mighty Grail Knight, he led an army to war against the High Elves of Ulthuan.

During the visit of an Ambassador of the Empire, Dragon Ships of the High Elves, who claimed the ruins of the ancient elven colony Athel Menya, landed on the Dukedoms coastline. The Elves arrogant leader known as Aenur demanded that the land belonged to Ulthain. Insulted the Duke rejected the claim of the Elf and both sides decided the situation was to be sorted by a tournament. Aenur chose the champion of François to be none other than Sir Edward, the Duke's own son. The tournament ended wih Edward being flung from his saddle by the Elf Lords lance. Edward left the Dukedom in shame, vowing to perform a great deed to make amends. Francois conceded and gave Aenur's army access to the ruins.

François was later told by court magicians that the Elf had used a magical Lance, the Duke protested indignantly against this violation of the commandments of honor and chivalry that had validity in tournaments in Bretonnia. He demanded that the result of the tournament was annulled. Francois led his army to the ruins and demanded that the cowardly Elf apologize and provide compensation for his dishonorable behaviour. The High Elf arrogantly boasted that on Ulthuan, no regulations prohibited magical weapons in tourny, and that a defeated Warrior had no right to make demands . The Duke was of course outraged by this overbearing behavior, and soon a battle raged between his Bretonnians and the armed forces of the High Elves.

Phoenix Guard slaughtered young Knights Errant, whilst the Elves famed Silver Helms were defeated by the Bretonnians Knights of the Realm, fleeing from the battlefield whilst being cut down.

After a fierce and hard fought battle, both sides disengaged. Francois met with Aenur, who had managed to survive the battle and demanded that he return in a years time to duel his son once more. This time following the rules of chivalry. The Elf Lord agreed and presented Francois with an enchanted sword in recognition of his skill in battle.