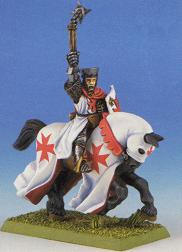 Odo d'Outremer was a great Questing Knight, famed for his actions during the Crusades against Araby and his allegiance with Suliman le Saracen.

Odo was one of many Bretonnian knights who fought alongside Louis the Righteous in the war against the evil Sultan Jaffar of Araby. Odo took part in the routing of Jaffar's army in Estalia and joined the pursuit to the sea. When the Bretonnian Knights ultimately followed Jaffar into his own parched desert lands, Odo was there. No matter how hot the sun, and depressing both thirst and flies, Odo relentlessly sought out champions of Araby to challenge and slay. Though they hid in their isolated oases, Odo tracked them down and forced them to do battle under the merciless sun.

Odo was as chivalrous as he was determined, and he honoured bravery and courage in a foe. When he met and defeated the deadly Suliman, he was so impressed by the saracen's courage, that he spared his life. The two warriors became firm friends, especially since Suliman, a man of honour, had no love or respect for the despot Jaffar. When Odo returned from Araby he brought Suliman with him as his faithful brother in arms.

Odo d'Outremer was a mighty warrior, fighting in the scorching desert against Araby's greatest warriors, he defeated all who stood before him.