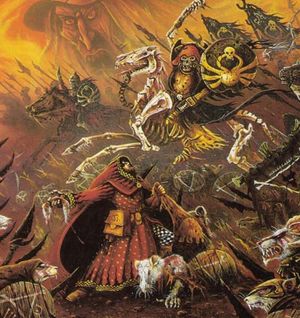 Bagrian, Abbot of La Maisontaal was a Bretonnian High Priest of Taal who stole the Black Arc from Skavenblight. [1a]

He often adopts the persona of old, learned scholar but he has huge power as the incarnation of the force of nature. [1b]

He investigating the history and threat of the Skaven for some years before daring to enter the depths of Skavenblight, stealing the Black Arc to investigate the Warpstone it contained. He quickly magically transported himself and the artefact home to the monestry at La Maisontaal but despite his wards and spells of protection, his theft was discovered almost immediately, sending the city into a vengeance fueled frenzy. [1a]

Only a few days later a powerful Skaven force had appeared at his monastery and fell upon the monks who defended the abbey bravely, holding the ratmen off. Worse was to come as the moon rose and a legion of corpses arrived, led by the Lichmaster who had been raiding Bretonnia. Initially the Skaven and Undead clashed but Bagrian knew that they may unite against him and his monks to gain the Arc, even if they fell upon each other later. [1a]

He sent his spirit out to seek aid and found a encampment of Bretonnian knights led by Tancred II, Duc de Quenelles - he communicated the nearby threat to the Damsel that accompanied him. The meeting of the three armies would be known as the Battle of La Maisontaal. [1a]

nitially the forces of the Skaven and Undead worked uneasily together but quickly fighting broke out between them when the Skaven attempted to assassinate Kemmler with Warpfire Throwers. Although the Zombies accompanying him burned, the Lichmaster himself walked unharmed through the flames and ordered his own forces to retaliate against them. As they fought Duc Tanacred held his men back until the right time for a heroic charge which smashed the skaven line. [1a]

The Grey Seer Gnawdoom, seeing the three armies embroiled in a brutal melee transported himself and small cadre of Gutter Runners into the heart of the monastery, seeking the Black Arc and killing Bagrian in the process. [1a]