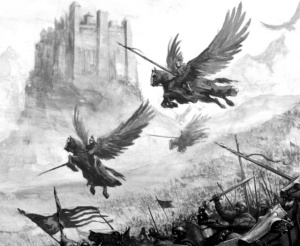 Pegasus Knights are particularly wealthy Knights of Bretonnia, who rode into war upon mighty Pegasi. [1a]

The richest and greatest Knights of the Realm ride to war atop the back of a majestic Pegasus. Most Pegasus Knights hail from around the border city of Parravon, hard on the slopes of the Grey Mountains where many of their noble mounts can be found. These creatures are difficult to capture and harder still to train, but once they are they make loyal and powerful mounts. Accordingly, to own such a beast is the ultimate symbol of wealth and success for their owners, but in truth a Pegasus is also a great practical boon for any knight fortunate enough to acquire one. [1a]

Unlike traditional mounted warfare, those Knights that can tame and ride the mighty Pegasus into battle are warriors without equal. Flying across the battlefield with wings of angelic appearance, the Pegasus Knights take to the sky and fight the flying monstrosities the enemy has unleashed upon them with lance and sword. [1a]

A Pegasus is stronger and faster than even the mightiest warhorse, easily able to crush a man’s skull with its flailing hooves and cover great distances swiftly. Indeed, in the more wild and inaccessible domains of Bretonnia there is real merit to a steed that is not prone to becoming mired in mud or entangled in thorns. On the battlefield, small groups of Pegasus Knights will group together, often outstripping the rest of the army as they search for honorable combat. [1a]

Bretonnian Fleets also enlist Pegasus Knights to guard against attack from the air. [3a]

Only the richest and most powerful nobles own a Royal Pegasus, for they are incredibly rare. Those fortunate enough treat theirs with the greatest respect, almost as if it were a peer. Each Lord has a handful of Knights Errant in his retinue whose responsibility it is to care for this, his prized possession and noblest of steeds. Peasants are never allowed near these beasts, lest their stench or clumsiness causes the pegasus harm - indeed, tales tell of the obsessive Volstall of Quenelles, who executed any peasant that even gazed upon his steed. Those superhuman Grail Knights who own the greatest and most noble of Pegasi, often form into elite groups known as "Royal Pegasus Knights". [1a]