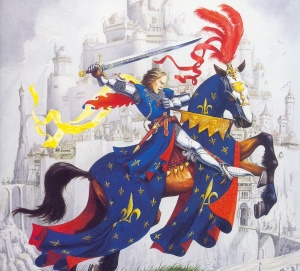 Agravain de Beau Quest, was a powerful Bretonnian Grail Knight famed for his daring quest into the heart of Athel Loren and his victory against the Wood Elves.

Agravain was raised in the castle of Beaumarchais in Quenelles. While his father, the Baron was on a campaign against the Skaven, the young knight remained in the castle for the protection of his mother and his sister Isabelle. During the campaign Agravain's father was slain, leaving the castle and its lands without a leader. Tormented by grief, Agravain's mother died only a few days later. Since only a full Knight of the Realm could be Baron, Agravain could not inherit the legacy, instead having to face a task of his sister's choosing. His sister however was in love, the former shepherd Jaques de Beaumarchais had been raised to knighthood for heroic deeds, and was of noble blood. Agravain had to compete with this young knight for his birthright. Horrified and disheartened, he finally accepted his sister's decision. The Dragon known as Drogo le Mal, had to be slain...and only one of the two knights could claim this heroic deed.

On the same day the two knight-errants set off. Agravain chose a route that led him to Dinan, a village recently devastated by the dragon, amongst the destruction he discovered a clue as to where its cave was located. He discovered the dragon's lair, but Jacques had also reached the cave and stood before the entrance. Both knights greeted each other as both allies and rivals. Suddenly Drogo broke out of the mist, both knights spurred their horses and lowered their lances to attack. Agravain rammed the lance into the throat of the great monster, but Jacques managed to pierce Drogo's heart, who then sank to the ground. Honour Bound as a knight, Agravain recognized the victory of his rival. Jaques however felt the same way about Agravain.

Isabelle welcomed the two heroes back to the city. As both knights were of the opinion that their rival had killed the dragon, both would have had to resolve the dispute in a deadly battle. The shocked Isabelle, however, used her right as lady of the land and declared her lover Jacques the winner, who later married her and became the new Baron of the city. Agravain accepted his defeat chivalrously but with great sadness.

Agravain's time as a real knight of the king was only very short. Together with Jacques he was knighted in the Grail chapel of Beaumarchais, only to take vow for the Grail shortly thereafter. The population of the city took this decision with enthusiasm, and from then on, he was known as Agravain de Beau Quest. In the coming night, he received a vision, in which a gorgeous woman holding a golden chalice was falling into a river.

Inspired by the vision, Agravain set off for the famed Tornament of Quenelles. The court jester Jasper de Mal Jeste and the bard Blondel accompanied him to write down the adventures of their master. Agravain first saw the great city of Quenelles and the tournament's prizes. A richly ornamented chalice, seemed unexpectedly familiar to him. As it turned out later, it was the mystical Chalice of Chanterelle, the young woman who had appeared to him in his vision and had long since been lost. Like the other Knights at the tournament, he also secretly hoped that it was perhaps the Holy Grail.

The tournament did not take place as expected. Wood Elves from the forest of Loren appeared and asked the Bretonnian knights to compete for the prizes, the Castellan of Quenelles Guillaume de Grenouille, was honour bound to accept. The conditions were tightened: six duels for life and death. At the request of the duke, Agravain also took part. It was customary before that the fair Lady Melisande gave favor to the valiant knights. To this she gave her clothes to the fighters as tokens of her affection. Agravain was the last one. When he faced the now half-naked and perplexed Melisande, Agravain renounced chivalry to her favor, unwilling to embarrass her further. She cut a curl from her hair and gave it as a gift, hoping Agravain would survive. The tournament began, and the the Wood Elves proved worthy opponents, before Agravain two knights lost their lives. But the skilled knight was superior to his own opponents and proved victorious. Meanwhile, however, the Elves had started an attack on the prize tents, unnoticed by the distracted tournament members, they overwhelmed the guards and stole the tournament prizes. By the time news reached the knights it was too late.

In the evening, while the high-ranking knights counseled what was to be done, Agravain retreated to the Grail Chapel of Quenelles. All night long he waited for another vision, but in vain. The next morning he awoke early and went down to the banks of the River Brienne. As he bent down to the water, the river suddenly fell. Agravain looked up and saw in the mists, a small boat with a beautiful young woman appeared. The vision passed as quickly as it had come. For a long time Agravain thought about what to do. But at last he went back to the Grail Chapel. Here, however, there was a crowd of people. The Duke had decided to send a pilgrimage into the forest of Athel Loren to claim the lost Challotte Chapel as recompense from the cowardly Elves. The Duke and his daughter, the beautiful Damsel, Eleanor asked Agravain whether he wanted to accompany the pilgrims. But he did not want to be deterred from his personal quest and humbly rejected their offer.

Agravain looked for his bard Blondel, whom he finally found drunk in a gutter. He asked the bard to sing the "Damoiselle de Challotte". The ballad was about the lady Chanterelle, who was ambushed by Wood Elves. Her companions were killed, except for a single bard, who composed the song. Chanterelle was never seen again. Now Agravain was sure: he was supposed to save the lady. It had been her cup, which now led him to the Chaldean Chapel. He had to hurry to reach the pilgrims in time.

Along with some of the other knights who had missed the departure of the pilgrims, he set off for the forest of Loren. In the meantime the pilgrims had been attacked by the huntsmen of the forest and had probably only survived thanks to Eleanor's healing. The losses were numerous, but the reinforcements which they had now received allowed them to push further on. Together they continued the journey. Baron Aloys de Montjoie, leader of the pilgrimage and a mighty Grail Knight, placed himself in service to Agravain, realising the young knight had a destiny to achieve, the eyes of The Lady were upon him.

When they had to camp overnight, Agravain again had a vision. He saw the woman of his previous dreams in the boat. She threw the chalice and her jewelery into the river, and afterwards drank a small vial. She lay down, closed her eyes, and died. Elves came cautiously and saw the dead woman. They enveloped her with leaves and carried her gently back to the Grail chapel where they laid her body down. Then they closed the entrance, and soon there was no sign of the chapel. He woke up worried. Was she dead? Or only in a deep sleep? Would he still be able to save her?

The army moved on. Before the island of Challotte, where the Grail chapel stood, they encountered the Wood Elves, their leader was known as Athelwyn. He tried to explain to the Bretonnians that the great Tree of the Shields had overgrown the ruins of the chapel and that this was a holy place for the elves. Then he took the chalice of Chanterelle out of his pocket and threw it at the bretons. It landed in the swamp and sank before the eyes of both armies. Agravain saw the tree and saw countless shields of Questing Knights who had died there. Their shields were hung as a sign of warning and as trophies. Agravain tried to control his rage, but the other knights could not and soon there was a bloody battle.

Aloys de Montjoie fought aside his five Grail Knight companions at the center of the battle, Agravain rode over the flank with the other Questing Knights and Eleanor.. They reached the island and carried out a successful attack against the elves defending it. Left alone was a deadly wood Elf Prince, Gyferth, after a fearsome duel Agravain was able to cast his opponent down. The battle was costly and very bloody, but finally, after Aloys had slain Athelwyn and sacrificed himself to the Elf Lords Highborn bodyguard, the elves turned to escape, incapable of defeating the Bretonnians. Reluctantly, Agravain pulled the helmet from his head and looked at a silver arrow stuck to his helmet. The lock of Melisande, which he still wore, had saved his life.

The tree of the shields was torn down and revealed the ruins of the Grail chapel. Along with Eleanor, Agravain stepped down into the debris of the chapel. Suddenly a ghostly creature appeared before them: the beautiful woman from Gravain's visions. He and his companion and fell to their knees. She handed Agravain the Grail, which looked like the chalice of the chanterelle. He drank. He felt like reborn, stronger than ever before. He was no longer a mere mortal. He was a Grail Knight.

Agravain looked over at Eleanor, who witnessed the fulfillment of his Quest. And only then did he realize that she seemed so much like the young woman from his visions, Chanterelle, It was as if she the living image of this woman of myth. By the victory in the battle, the Challotte chapel was finally made accessible again. Eleanor, also inspired by the ghostly appearance in the ruins of the chapel, decided to become the Damsel of this sacred place. Gravain de Beau Quest became her only, devoted protector.

In the meantime, Blondel had written the adventures of his master. He christened the ballad "Chanson de Challotte". Agravain released him of his commitments, so that the bard could travel through all of Bretonnia to report on the exploits of Agravain. The song would became legendary in the courts of Bretonnia, a symbol of knightly perfection.

Agravain was a deadly warrior, capable of slaying a Dragon and a Wood Elf Prince while still a regular human.

The "Tress of Melisande" was gifted to Agravain after his deadly performance at the Grand Tourny. A mystical favor, it was able to disregard the first attack any opponent made against him.