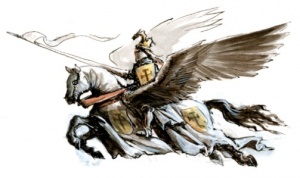 Fastric Ghoulslayer was a knight famed for his hatred of the undead, especially ghouls. Fighting alongside Jerrod and the famed Tancred II at the second battle of La Maisontaal. Fastric would slowly gain renown throughout Bretonnia for his exploits, leading a massive force of Pegasus Knights known as "Fastric's Skylance" into battle during the End Times. As part of the mighty Companions of Quenelles, ariel forces.

Fastric was eventually killed by the vampire Erikan Crowfiend, despite defeating the vampire his hatred for the undead would allow the creature to kill him, stabbing him in the throat as he gloated in the vampires suffering.