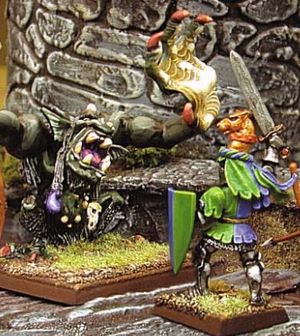 Sir DuClaw was a Bretonnian Paladin, and a Questing Knight known for his battle against fierce Trolls, atop a narrow bridge.

Once the roadways were safe, but lately parties of brigands and worse had been attacking travellers. This being the case Sir DuClaw had been tasked with guarding the noble lady Genevive on her way to be married to a powerful Duke of Bretonnia.

As the small party approached a small bridge blanketed in thick fog, DuClaw knew that this would be the worst part of the journey. Cursing the lack of vision and ordering his men not to tarry, DuClaw witnessed a massive shape looming in the mists ahead. Perhaps even more ominous, a slurped sound came from behind and below, as if some massive creature was was shuffling up the riverbank to block any escape. This cursed bridge had been housing a group of Trolls, who had grown monstrous and strong feeding on passing travellers. Sensing by his Men-at-Arms fear and the strong smell of death and rotting fish, DuClaw readied himself for battle, with the trolls eager to devour him.

Surrounded by blinding fog and beset by starving monsters, the Paladin and his men fought ferociously. After a fierce skirmish Sir DuClaw was successful in his duty and had personally slain at least one of monstrous trolls atop the bridge. The Paladin was rewarded for his deed, the bride-to-be gifted him with a potion concocted from the trolls blood, which would enhance his strength.

Sir DuClaw was a deadly warrior, knighted as an elite Paladin of the Realm, and travelling the world as a Questing Knight.

The "Potion of Strength", was a potion made from Trolls blood, enhancing Sir DuClaw's strength considerably.