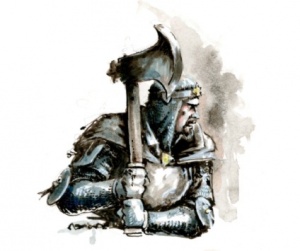 Theodoric was Duke of Brionne[1][2a][3], a man of large physical stature, he was known to be a brutal warrior, forgoing the sword for his enchanted battleaxe.[2b][3]

Duke Theodoric almost seemed to be two different people, in battle he was a terror, wielding his great battleaxe to deadly effect. He had faced down terrifying enemies, leaving their corpses on the ground. He always led from the front and rarely returned unwounded. Away from battle, the Duke was a patron and connoisseur of music and song, known for his compositions of poetry and song.[3] Theodric was also a renowned drinker[2a] and womanizer, causing great friction with many married nobles.[3]

The duke would eventually meet his end during the end times, slain by Anark von Carstein, the Blood Knight leader of the Drakenhof Templars.[2b]