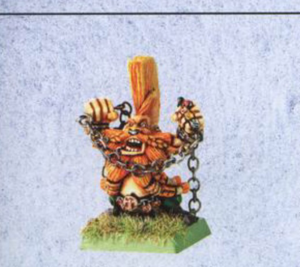 Crazed Khargrim was an insane Dwarf Daemon Slayer who fought during the legendary War of Vengeance, also known as the War of the Beard. [1a]

Crazed Khargrim was mighty Dwarf Slayer, desperatly seeking his own demise when the War of the Beard broke out. He threw himself recklessly into combat, battling mighty Elven heroes and slaying a number of ferocious Dragons and young Drakes, until he was captured and imprisoned by the Elves. In chains for years and denied the chance to die in combat, he slowly lost his tenuous grip on sanity, and devolved into a mindless killing machine. Ripping the chains free of his stone imprisonment, he went wild within the Elf fortress, slaughtering countless warriors with his chains before escaping. He was directed into battle by his fellow Slayers for the remainder of the War of Vengeance, unsuccessfully seeking his own doom. As the war drew to an end, he vanished into the mountains, travelling north, and his name was never recorded in the history books again.[1a]

Crazed Khargrim was a powerful and dangerous Daemon Slayer driven mad by his imprisonment by the Elves. [1a]