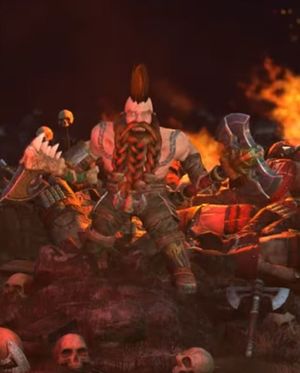 Bragi was born to a much diminshed clan of the capital city and hold of the Dwarfs and he grew up longing to win fame and restore his family. [1]

Along with his father and older brothers, he was one of the first to join the army of Thorgrim Grudgebearer that sought to aid Kislev against the chaos invasion. They were soon fighting for their lives within the walls of Kislev itself and were part of the dwarf counter attack that threw back the first assault on the city where Bragi gained the name Axebiter for his fearlessness. [1]

However, Bragi began to crave more glory and when the human army of Magnus the Pious arrived, he led a force of 300 Dwarfs to join up with the humans but it was a doomed endeavour for the horde between them was too great. The charge was driven back with half of the dwarfs killed, including Bragi's father and brothers. Greatly shamed, Bragi chose the path of the Slayer. [1]

At the final Battle for Kislev's Gate he carved his way towards the hordes leader, arriving to see Magnus cut him down. After the battle was won, he accepted Magnus's offer to join his retinue, considering that the new Emperor owed him a glorious death! [1]