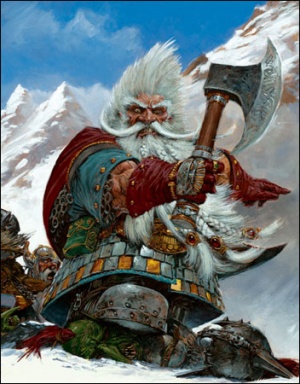 The White Dwarf is the legendary Dwarf --known in Khazalid-- as Grombrindal, which roughly means "The White - Bearded Ancestor". Over the centuries it has received several names, but this is the one by which it is most known.

No one knows where to find the White Dwarf. He appears when and where his people are in serious difficulties. When everything seems to go wrong for the Dwarfs, he arrives. He has been seen many times throughout the extensive history of the Dwarfs and there is evidence of his mysterious and unexpected appearance in the most awful moments of the battle in a multitude of sagas. Each time he has appeared, the tables have changed in favor of the Dwarfs. In the case of Umthi the Damned and his comrades they were surrounded by Goblins. When all seemed to be lost, the goblin horde retreated in panic and could hear Umthi warriors whispering "The White Dwarf" in full of admiration.

He was in the center of the enemy and was possible to see his iconic white beard brandishing his mighty axe, cutting his way through the countless ranks of the enemy. Before that motivating vision; The people of Umthi, despite bleeding from multiple wounds and being fully exhausted, drew strength from the greenskins' weakness and lunged forward one last time in a desperate effort to reach the White Dwarf, standing alone among the Goblins. When they got the victory and Umthi glanced around the shattered field, the White Dwarf had disappeared and there was no trace of him except for the piles of dead Goblins. In the same place there is now an altar in honor of Grombrindal, although there are many more in the kingdoms of the Dwarfs.

Some say that the White Dwarf is none other than Snorri Whitebeard, the Dwarf King of Karaz-a-Karak, who was the only High King of the Dwarfs to receive due and deserved respect from the Phoenix King of the High Elves of Ulthuan. But that was a long, long time ago, before the War of the Beard; And, if it were true, the White Dwarf could be considered a true ancestor who undoubtedly managed somehow mysteriously to push the limits of mortality.

In the Saga of Grombrindal it is said that he roams the Worlds Edge Mountains following the old dwarf ways. He disguises as an old prospector covered with a large mantle. Always accepts a drink of good dwarf beer from any traveler who is on his way and, in turn, presents him with a prophecy.

It has been sighted on many occasions a strange and solitary Dwarf that matched his description in a dwarf camp on the eve of a great battle, alone with itself. Sometimes his silhouette has been seen walking on the battlefield of a besieged fortress, which is considered a good omen that bears victory and hope. The next day, the White Dwarf would make his appearance in the battle clad in all his royal panoply of war, like a legendary ancient king, like a true ancestor, like a figure who has come to life from the old dwarf engravings.