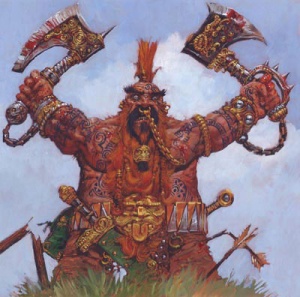 Wishing to lift the burden and shame that his father has endured upon taking the Slayer Oath, the young Prince ritually shaved his head and became a Slayer in hopes of dying in battle to fulfill that purpose. His father did not agree with his method, for by taking up the Slayer Oath the young prince, like his father before him, had foolishly continued the never-ending cycle of shame that has plagued Ungrim's family blood-line for several generations. Rash and stubborn, the prince became more concerned about finding his death than taking up the duties as the future King of Karak Kadrin. Should Ungrim Ironfist not find his death soon, his son would eventually find it, depriving his people a heir to the Kingdom.[1][2]

Garagrim had devised a plan to fulfill the Slayer vow himself and therefore redeem his family line of its dishonour. He was killed early in the End Times under unclear circumstances thus fulfilling the Slayer vow of his family line. Ungrim, however, unable to bear the loss of his only son, took the Slayer oath once again.

In the Storm of Chaos story, which heavily inspired a lot of the End Times narrative, Garagrim died by being crushed by a Chaos Giant.