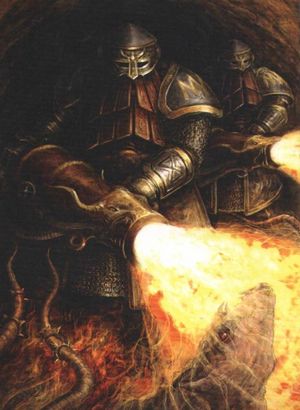 The Dwarf Engineers Guild invented a weapon, the Drakegun that launches alchemical fire although such is its power that even the gromril armour of Ironbreakers does not fully protect against its fury. New armour was produced with the age of Runesmiths that can withstand it, gaurded by runes of protection orignally created to safeguard those who worked in high temperatures such as the forges. [1a]