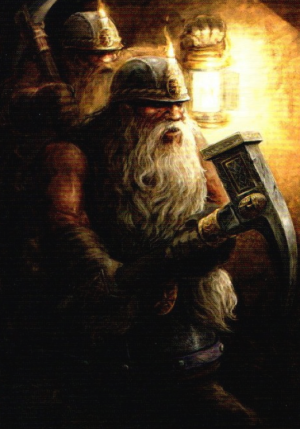 Dwarf Miners are those irregular band of Dwarfs that answer the call to battle outfitted with tools of their trade, such as mining equipment, Pickaxe, Mattock, and boxes of lethal dynamite.

The Miners Guild in Dwarf society is second only to the Engineer's Guild in prestige. [5a]

Dwarfs have an insatiable thirst for gold, and their Miners construct deep shafts into the heart of the mountains in their quest to acquire the valuable metal. They also mine for ores and gemstones, and are very skilled at digging tunnels at incredible speed. The networks of mines and tunnels run through every mountain range. In battle, they use their knowledge of the tunnels and mastery of the heavy, two-handed pick axe with deadly intent.[1][2a]

Even the smallest Dwarf holds are populated with a fair number of Miners. As an underground dwelling race, Dwarfs always need experts at delving into bedrock, and this, coupled with the race’s insatiable lust for gold, ensures that all mountain abodes are riddled with any number of deep shafts dug down in search of precious metals and gems, many Dwarf crafts being dependent on a regular supply of both. With their short but powerful build, Dwarfs are ideally suited to mining — their strength and endurance allowing them to tirelessly wield pick, hammer and shovel.[3][4]

They also have an instinct for the stone, knowing where best to dig and when to pause to shore up a section of tunnel. Collapses and other accidents are rare. The longer established a mine is, the more mechanical contrivances there will be. Steam-powered engines, fixed in position, continually haul chains which tow wagons out of the depths. Some clans may even use a new-fangled boring machine that some Engineer has invented. Great steam engines draw in fresh air or haul chains to tow wagonloads of rock out of the depths. Some Miners even take to war with a few of their ‘gadgets’, such as blasting charges or a steam drill to aid in undertunnelling the enemy battle lines quickly. But, however succesful they are, they can never replace the skill and experience of a Dwarf Miner.[3][4]

When Dwarfs march to war, many mining clans form regiments to join the battle. As a point of pride, they do not bear axes, but instead wield the same heavy two-handed mining picks and mattocks they use to laboriously carve out tunnels. As it turns out, these well balanced and sturdily made tools work equally well whether digging into bedrock or hacking apart Goblins. Because tunnelling in the deeps is dangerous work, Miners constantly wear heavy armour and helms. Down the ages, this mail has served to protect them against rockfall and cave-ins as well as turning aside such attacks as Elf arrows or rusty Skaven blades.[3][4]

Miners have a wide knowledge of subterranean tunnels and, if there is not already an easily accessible underground route to an enemy’s vulnerable flank or rear, the Miners will make one! Few enemies react calmly to the trudge of heavy boots behind them, and many a desperate batde has been won by Miners arriving in the nick of time from an unexpected quarter. Led by a Prospector (the most veteran member of the crew), Miners can wreak havoc on a foe’s battle plans.[3][4]

Miners are extremely skilled in the art of using black powder to blast their way to mineral deposits - needless to say something this destructive can be useful in a tight spot during battles and sieges. Their Prospector can wield a steam drill instead - a piece of mining equipment that is also of use on the battlefield. A small steam engine, usually alcohol-powered, is used to drive the hammer with such force that it can punch through rock - and armour - with ease.[3][4]