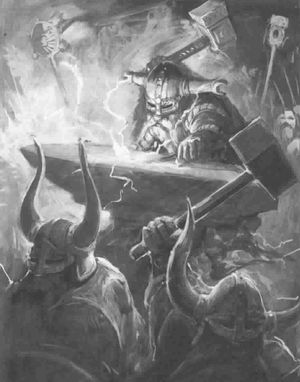 These Anvils were covered in complex runes that the later Runesmiths could not comprehend. When striking the Anvil, a Runesmith used techniques taught to him by his master, who had learned from his master, and so on back. Because of this, no two Anvils of Doom worked the same.

The most skilled of the Runesmiths of old, Kurgaz used Gromril to create the anvils and beat the Rune of Sorcery into them in the forges of Thunder Mountain. However, a Dragon attacked and broke open the mountain, killing Kurgaz and many of his peers and destroying its forges. [2a]

When an Anvil came to battle, it was accompanied by two Anvil Guards. These Dwarfs were bound by unbreakable oaths never to leave an anvil or its smith to the enemy.

While in the past the Anvil of Doom was mounted on wheels to move it across the battlefield, today it will be placed before the beginning of the battle on one point - often a hill top - to strike the runes and unleash the old power that is bound inside of the Anvil.

When struck correctly the Anvil draws magic to it to create various effects:[2a]

Known Holds with a Anvil