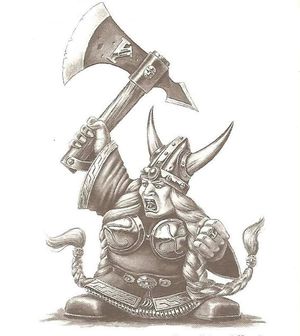 Helgar Longplaits the Hard was the Dwarf Queen of Krag Bryn and a descendant of Bronn the Bold. [1a]

As the last living descendant of her ancestor, Helgar was queen when the elves arrived on the nearby shore and began creating a port city they called Tol Eldroth. With a long standing grudge against the nearby hold of Kazad Thrund, all trade inland was heavily taxed but with the Elves she saw a new opportunity. She accepted Ambassadors from the city and whilst they had arrived uninvited, she declared she would accept their presence in return for their recognition of her as High Queen of the hold. [1a]

Trade began between them and quickly proved successful, even if elven trade goods were called tribute and the dwarf treasure gifted in return would be termed subsidies. She also recieved their pledege to aid her in any battles, as her own forces were now very small. [1a]

Angered by the ongoing new trade and still hoping to fulfill his ancestors goal of taking Krag Bryn for himself, Drong the Hard, king of Kazad Thrund sent his kinsman to ferment revolt in her mines, forcing Helgar to seek aid from Lord Eldroth. They dispatched a force under Fendar to intercept the growing band of angry, drunken miners which led to the Battle of Grudge Pass. [1b]

Despite the rebellion, Helgar kept her throne and as time passed, Drong now sent letters of reconciliation and gifts including fine jewels from Karak Izril. She invited her rival king to a great feast and as a thousand dwarf ate and drank, Drong saw her wielding her tankard like a true dwarf and was smitten, proposing to her that very night. She accepted and the Dwarfs of both holds rejoiced as did the elves of Tol Eldroth, with trade once again resuming and even expanding further inland through the road controlled by Kazad Thrund. [1c]

The marriage held fast but tensions were arising between the Elves and Dwarfs and even minor conflicts were beginning to arise as the scene was set for the War of Vengeance. [1c]

This strife came to Karag Bryn with a angry Runesmith, Grung Grudge-bearer whose home had been ransacked by Dark Elves, and who challenged Helgar's husband with the words: Is it fitting for a Dwarf such as Drong to make Elves rich? Noting her husbands reaction to the Runesmiths words, she sent an urgent message to Lord Eldroth warning him which led to an ambush as Grung was travelling along the Dwarf Road. [1c]

Outraged when he heard of the attack, Drong had a huge row with his wife, with ale being spilled and Helgar nearly shoring off his beard with her axe before he stormed off to his own hold. Worried that her husband could attack her or her holdings, Helgar orderd the seizure of his Brewmaster who had not yet left the hold and sent a message to Drong - If you dare to attack me, it's no more ale for you!. A terrible threat to any Dwarf. [1d]

Hearing that Drong had sent a force to try and retrieve him, Helgar with few warriors of her own, once again called upon Tol Eldroth for aid. Lord Ardath the Vengeful led hardeend warriors to forstall that threat. [1d]

His anger growing each day, Drong gathered an army and set out for Tol Eldroth to drive the elves from their shores to allow him to deal with his wife in his own way and time. Lord Eldroth was well informed and led his own host to meet the Dwarf army, whilst Queen Helgar mustered a small contingent of Slayers and marched to the field, but unsure of what to do. [1e]

As the battle raged, Helgar and her retinue watched, but seeing Lord Eldroth, her stalwalt ally cut down and then her severely wounded husband fighting defiantly against the Elves she could not stand by, leading her slayers across the bridge into the fray. However the battle was lost, the equally outraged and betrayed elves cutting down both Drong and the slayers with the survivors having to flee back to their respective holds. [1f]

Now at war with the Elves, Helgar would appeal to Dwardom at large and they responded as the War of Vengeance came in full force to her shores. [1f]