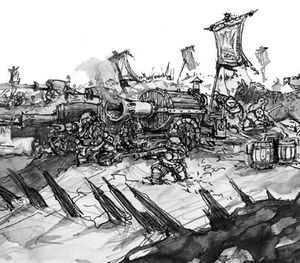 Built by skilled Dwarf Engineers, Dwarf flamecannons unleash bursts of burning liquid over their enemies - these are deadly if short ranged war machines. [1]

As there is a chance that the cannon will explode when fired, the Dwarfs who use these weapons are extremely brave. The chance of a misfire becomes higher if the usually sturdy weapon is damaged. [2a]

Many diplomatic missions have travelled from the Empire to various holds offering generous trade deals in return for the secret of the Flame Cannon, but always without success. One artillerist was sent to try and steal such secrets, but was later returned, barely recognisable, burned to a crisp by the weapon whose secrets she sought. A note was enclosed, apologising for an unfortunate accident. [4a]