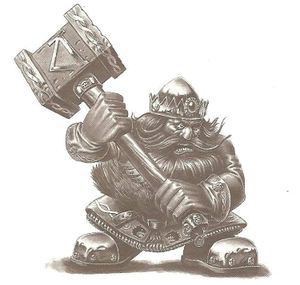 Drong the Hard was the Dwarf King of Kazad Thrund and a descendant of Thrund the Angry. [1a]

When the High Elves arrived on the nearby coastline and began trading with Krag Bryn with whom his clan had an ancient grudge, he was outraged and disgusted - especially since he could not tax the goods as he did with those that were traded inland. He also sent word to Karaz-a-Karak that they had done so. [2a] and put out the (false) word that he was the true inheritor of that hold and began gathering forces for a conflict with its Queen, Helgar Longplaits. [1a]

He sent kinsmen to various mines to stir up ill feeling against the queen and cultivate them in favour of himself. [1a] Soon Krudd Mad-Mattock a Dwarf Engineer called for a vote at the local Engineers and Mining Guild which led to the mining settlements downing tools and the queen was forced to go to the elves at Tol Eldroth for aid. [1b] The failure of the rebellion forced Drong to change his tactics and he now attempted reconciliation with Helgar, sending her gifts and messages of friendship. After receiving magnificent jewels from Karak Izril, she relented and invited him to a great feast. [1c]

Impressed with her ability to wield a tankard and surrounded by a thousand dwarfs from both holds happily drinking together, Drong decided to unite them further by marriage, proposing to Helgar which she accepted. All the Dwarfs and the Elves of Tol Eldroth celebrated the end of hostilities and the reopening of trade routes as the couple wed. [1c]

Some years later the Runesmith Grung Grudge-Bearer arrived at Krag Bryn and asked Is it fitting for a Dwarf such as Drong to make Elves rich? to the shame of Drong and the annoyance of his wife. The next day whilst travelling, Grung was ambushed by Elves. [1c] Learning that his drinking companion had been attacked, Drong flew into a rage and had a thunderous row with his queen with ale being spilt and Drong narrowly escaping having his beard shorn off by her axe before he left the hold. [1d]

Soon Drong was further outraged by his Brewmaster being imprisoned and recieving a message from Helgar saying If you dare to attack me, it's no more ale for you!. A terrible threat, made more so as he would also be unable to reward his warriors and lords with ale and so he dispatched Skag the Stealthy to rescue the Brewmaster. [1d]

King Drong was now determined to drive the Elves into the sea and amassing a huge army marched on the High Elf City but was met on the field of battle by an equally large and powerful Elf force. [1e] Following the initial exchange of missile and artillery fire, Drong led his Hammerers and Miners forward and was intercepted by Lord Eldroth and his cavalry and the two leaders fought, Drong slaying the Elf commander but not before suffering a severe wound himself. Soon he would fall, fighting bravely against Elven swords and spells even as his queen finally decided to join him in battle, betraying her allies. [1f]

His body was taken back to his home hold by his kinsmen Krudd and [1f] and word sent to the High King of his death. [2b] The following entry was made in the Great Book of Grudges: Be it known unto the uttermost ends of Dwarfdom that the King of Karaz-a-Karak long of beard requires all Dwarfs to untiringly and unceasingly see vengeance against Tol Eldroth in retribution for the slaying of Drong the Thrundling. [1f]