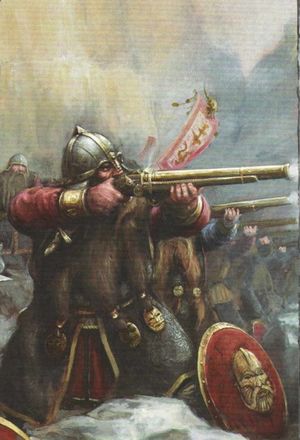 Thunderers or Arquebusiers are Dwarfs armed with handguns.[1a]

Some Dwarf clans purchase and equip warriors with handguns from the Engineers Guild. Each is a work of art, more effective and accurate that those used in the Empire. [2a]

There is quite alot of rivalry between Thunderer and Quarreller regiments and bloody brawls have been fought over which weapon is better. [4a]

It was a very long time between the discovery of black power by the Dwarfs and the approval of the Engineers Guild for the large scale use of handguns by line of battle regiments. [4a]