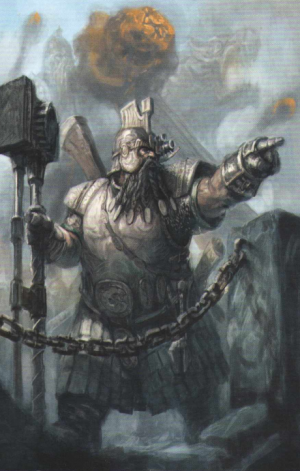 Dwarf Master Engineers are the greatest and most intellectual individuals the Dwarf Engineer's Guild has to offer.

Given the number of war machines with which the Dwarfs can equip themselves, it is not surprising to find members of the Engineers Guild accompanying a throng to battle. To most Master Engineers, this ‘field work’ is tiresome, as it takes them away from their forges and workshops and shows them first-hand how their beloved engines of destruction are dragged into position, dented by enemy shot and invariably aimed in a manner not as fully optimised as would be ideal.

As all Dwarfs revere fine craftsmanship, their war machines are the most polished and best cared-for in the world, treated by their crew with all the respect due a venerable clan member. Nonetheless, even this level of care falls well short of the wishes of the notoriously cantankerous Engineers. After a battle, Master Engineers oversee repairs, but during the fight, they are exceptional, if gruff, at directing crews on how to best aim and fire a war machine. Theirs is a skill born of intimate familiarity with the workings of each device. With a glance, a Master Engineer can tell when a bolt thrower is set with too much torsion or when conditions warrant extra black powder for an organ gun.

They are consummate craftsmen, being able to gauge the intricacies of laying the deadliest of cannon shots, or giving advice on how best to carve boulders into the most accurate ammunition for a Grudge Thrower. A Master Engineer can also direct the rapid construction of effective entrenchments — such as stacked stone walls or dug out gun pits — that offer protection from enemy missile fire to both war machine and crew. Master Engineers are doughty warriors, and while they might be more interested in drafting plans for fortifications or designing new mines, they are more than capable of fighting in the front lines. To protect their precious war machines, they fight with all the determination and grit of their race.