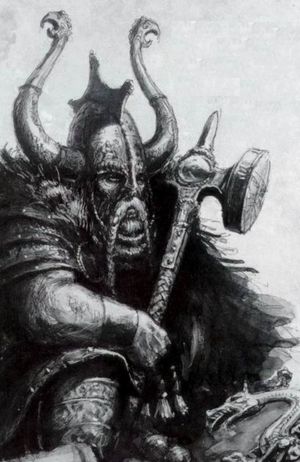 King Alrik Ranulfsson is the Dwarf King of Karak Hirn. [1a]

He is a very traditional Dwarf and has spent considerable time and effort seeking to erase the many grudges in the holds book of Grudges. So asidious has he been that one entire volume has been scoured of unpaid blood debts. Alrik carries this book with him to inspire others of his race. [2a]

With soldiers from the Reikland, Alrik led the warriors of his hold to victory against the horde of Grothak One-Eye at the Battle of Iron Crag. He is said to have killed three dozen Orcs himself and following the bloody victory had a great mound of Orc skulls built to honour his fallen allies and warn the greenskins against invading the area. [1a]

He joined with Thorgrim Grudgebearer to cleanse Black Fire Pass of greenskins, the two kings meeting amongst the slaughter to converse before they rejoined the battle. By the time they had achieved victory, they had struck out several grudges. [3a]